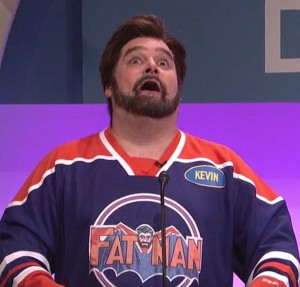 In a recent episode of Saturday Night Live, Bobby Moynihan played Kevin Smith in one of their famous Celebrity Jeopardy sketches. It was a little strange considering how niche Kevin’s fan base is, but the caricature basically consisted of a quick joke about smoking weed and a whole lot of enthusiasm about podcasting. As dumb as it sounds (and it was), it was accurate. Kevin Smith does smoke a lot of weed, but he is one of the best podcasters in the medium.

When I was student teaching and driving almost three hours a day to school, class, and home across the entangled Northeast Ohio highways, podcasting saved me. I won’t go so far as to say Kevin Smith saved me, but trust me: he’s one of the greats. The way he can embellish on a story, even sprinkled with tons of stuttering and swearing, makes anything sound interesting and entertaining, and, even better, he can make you interested in anything. From his tales of Jason “Jay” Mewes’ battles with addiction in Jay and Silent Bob Get Old, to his commentary on Grant Morrison’s JLA run on Fat Man On Batman, he’s got a knack for emotional build-up, suspenseful moments, and pay-offs, all three of which would serve his directorial debut on ‘The Flash’ well.