Kevin Smith is the reason I watch ‘The Flash’. 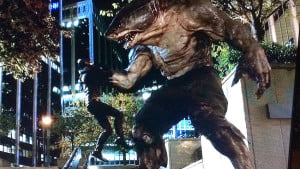 I was listening to Kevin Smith talk to his co-host Marc Bernardin on Fat Man on Batman, explaining how he recently binge-watched ‘The Flash’. The acting, character moments, and sheer ballsiness of the show hooked him, and it was the genius overarching storyline of the Reverse-Flash that convinced Kevin Smith that ‘The Flash’ TV show is one of the greatest works of fiction in any medium. In fact, it was hearing about King Shark showing up in an episode that convinced Kevin to watch it — he’s a fanboy who can appreciate those “deep cuts”. Kevin’s usually pretty enthusiastic about everything even when he’s against the majority (keyword “usually”; sorry, Batman V. Superman), but this was unusually high praise. And for someone who was already watching the somewhat campy ‘Arrow’, I decided to give it a shot, too, and here I am, writing recaps and editorials for the show on a weekly basis! When I heard his interview with Andrew Kreisberg, one of the executive producers of ‘The Flash’, I remember thinking to myself how awesome it’d be if Kevin Smith could write for ‘The Flash’, and mere days later his directing gig was announced.