A much larger story for Kahina Ziri 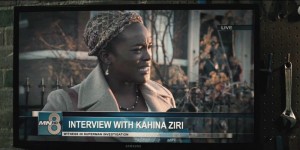 She is briefly seen in the theatrical cut, but in the ultimate edition, plays a much larger role. In the theatrical cut, she is one of the witnesses to the African massacre who testified before congress about Superman’s recklessness. Turns out, she’s a local, Luthor paid her off, and she’s one of his loose ends. When Clark is trying to figure out what’s going on, he tries to pay her a visit, but she hides knowing she has to stick to the story. Eventually, guilt takes over, but in before she can testify, Luthor’s henchman Knyazev kills her.