Zachary Zirlin, the graphic designer for Daredevil season one, Jessica Jones, and Luke Cage, met with the Man Without Fear to discuss bringing the world of the Netflix shows and their version of Manhattan to life. Zirlin was tasked with connecting the shows to the greater Marvel universe, and creating a New York City that is slightly different to the the real world’s. 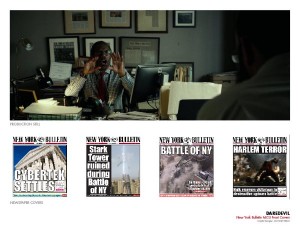 Fans certainly noticed this particular detail Zirlin’s team worked on, the newspapers from the New York Bulletin which served to connect Daredevil to the Marvel films and were created in close coordination with Marvel Studios.

We work very closely to create the newspapers. I love putting as many easter eggs in there as possible. Michael Tuths, our clearance coordinator, has been invaluable in helping to wrangle and brainstorm ways we can keep as many easter eggs as possible. Creating the New York Bulletin was a lot of fun as we were creating our world’s version of the Daily Bugle. Due to all the rights negotiations and whatnot surrounding Spider-Man and Sony, we had to create our own newspaper instead of using the Bugle known from the comics. We went back and forth defining the type of paper we wanted, how it was perceived, the type of journalism, etc. and I began creating versions. It was definitely a fun collaboration that we’re all happy with. We had a lot of fun working closely with Marvel to create some of the Bulletin’s most famous articles and covers, many of which were written by Ben Urich. You can catch them in the background of Urich’s office and the Bulletin offices.

Zirlin spoke about how even tiny details such as the whiskey labels in Josie’s Bar and the advertisements in the subway were areas the design team changed and created their own images to help bring the world of Dardevil and the other Netflix characters to life. 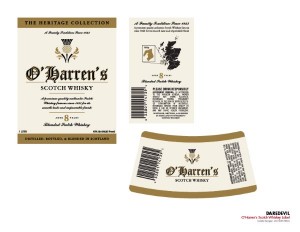 I have to say that liquor and beer labels are some of my favorite things to design. There is such a wide variety in the world and it’s so much fun to try to establish a fictional brand. I begin by doing research for some inspiration. I try to look at similar products as well as specifics of country of origin, perceived market, iconography, color palette, etc. From there I spread it all out digitally or physically and get going. We hopefully have a bottle style chosen at this point so I can design to a specific “canvas”, but I start by putting together all the elements. The name, the logo, any design elements, and even the little bits that help sell it as a real product, like the alcohol percentage and volume markings. I typically end up playing around with 3-4 versions before I’m happy to share with the rest of the team. Once approved, it’s time to get it made. I have a few vendors that I work with to turn the design into a reality. I love making them as realistic as possible and working with my vendors to make them something more than a simple printed label. I love to incorporate metallics, foils, and texture whenever I can to make it feel like a real brand. The subway ads are a very similar process but a little more difficult. Real subway ads are quite often for movies and tv shows. We’re creating our own realistic world and trying not to tie ourselves to any one specific time period so I generally try to keep things as non-descript as possible while keeping it as grounded and realistic as possible. Whenever possible, I try to throw in easter eggs and references to our other shows.

The boxing match posters in Fogwell’s Gym during season one of Dardevil are also something the design team worked on, and are filled with the names of cast members instead of actual fighters.

That is something you’ll see in most TV shows and movies. When we need to populate paperwork, posters, signs, etc., we have to do so with names that we are legally allowed to use. It’s typically part of our start paperwork and contracts that crew members names can be used on screen. So when I’m tasked with creating over 40 boxing posters, it ends up being a full on crew-on-crew brawl. It’s also a really great way to throw some love to the crew. It takes a lot of people to make a show and putting their names on something seen on screen is a fun way to show appreciation. (And I always get tons of requests to print copies for them). In order to show the passage of time, we created a ton of older posters that would play in both the flashbacks and the present day. We felt that Fogwell’s was an old school place that wouldn’t be getting rid of their old posters. We then created some more contemporary posters to help show the progression of time, but wouldn’t overtake all the history of the place.

Zirlin just finished working on Luke Cage, so it’s exciting to imagine what details he has cooked up for that show, and he is also likely working on the upcoming Iron Fist.

How many of these details did you spot? What other cool easter eggs do you hope Zirlin incorporates into future Netflix series? Let us know in the comments down below!