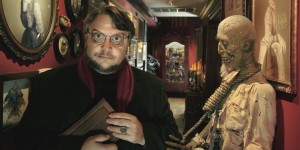 My first worry was how involved will Guillermo Del Toro be? Its no secret that Del Toro has been involved with this film in some shape or form for a number of years. It would be highly unlikely that Warner Brothers would throw away the groundwork he has left.

Interestingly enough, Guillermo actually helped Doug Liman out in the pre-production of Edge Of Tomorrow. He’s credited as “Special Visual Consultant” which is kind of a vague title, but it really means that he helped design the look of the film’s creatures, the mimics. I take that fact as a sigh of relief, by knowing Guillermo and Doug have previously worked together and then Doug taking on one of Guillermo’s projects shows me there will be a fruitful collaboration. Don’t be surprised if Del Toro’s look is all over this film in the creatures and characters such as Swamp Thing.