Game Of Thrones Recap: S6E10 ‘The Winds Of Winter’

Jon and Melisandre are in Winterfell’s great hall when Davos finally confronts her about Shireen’s death. She admits she and Stannis burned her at the stake. Davos demands she be executed for murder. Despite her warnings about the the Long Night, Jon chooses to exile her from the North and Davos promises to personally kill her, should she return. This has been a long time coming and, like many elements in this episode, it was nice to see that many elements thought lost in the shuffle were simply held back for maximum impact.

Watching from the ramparts as the Red Woman leaves, Sansa comes to join Jon. He’s grateful for saving them last episode and she explained her lie about knowing Littlefinger prior to the battle. All Jon wants is for them to trust each other. 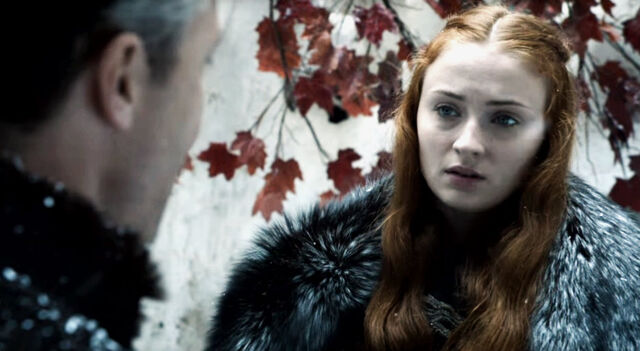 Littlefinger approaches Sansa in the Winterfell godswood. He puts on his “charms” and admits what we’ve always known: he wants to sit the Iron Throne. And he wants Sansa to be his queen. She rebuffs his creepy advances but he takes the opportunity to remind her the ramifications of his decision to ally with House Stark. She’ll have to make a decision about what comes next.

In the great halls with all his allies Northern and wildling alike gathered, Jon is left to navigate the political aftermath of the Northern Rebellion. Fortunately, he has a very spunky 10 year-old girl on his side and her name is Lyanna Mormont. She calls out the absent lords who refused to fight for Winterfell and generally just does her badass thing about how they only kneel to a true Stark (best new character IMO).

Lord Manderly, a very popular book character, appears to give a short speech and endorse Jon Snow as king, followed by Robett Glover, last seen acidly rejecting the Starks in “No One” and all the others, culminating in a chant that echoes the crowning of Robb in season 1.*

*This sets up some tension, since we discover this episode Jon is Lyanna’s kid, not Ned’s. Will this information be used against the very newly-crowned King in the North, when it inevitably gets out?