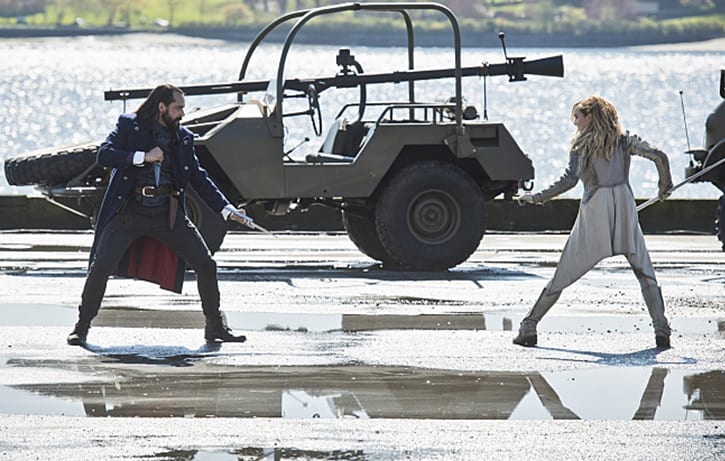 Legends Of Tomorrow will be the first DCTV show to wrap up its season on The CW as Rip Hunter and his time traveling legends faces Vandal Savage for the ultimate showdown that this season has been building up to. The network released an extended trailer for the Season 1 finale titled “Legendary” yesterday which teases the big trouble that Vandal is up to. In addition, they have previously released official promotional images.

“Legendary” will feature a lot of big things as we will see the debut of Suits’ Patrick J. Adams as the identity of his mysterious DC hero will be revealed which will be the first setup for the second season. Sara Lance will also finally be learning about the death of her big sister, the Black Canary, with a guest spot from Arrow’s Paul Blackthorne.

“THE FINAL BATTLE – After the numerous sacrifices the team has made since the beginning of this ride, Rip (Arthur Darvill) decides that it’s time they each decide their own destiny and returns them to Central City a few months after they first left. Returned to their normal lives, each team member must individually decide if they are willing to sacrifice everything in order to save the world. Meanwhile, Sara (Caity Lotz) visits with her father (guest star Paul Blackthorne) who delivers some heartbreaking news about her sister. Dermott Downs directed the episode with story by Greg Berlanti & Chris Fedak and teleplay by Phil Klemmer & Marc Guggenheim (LEG116). Original airdate 5/19/2016.”

Legends Of Tomorrow, which has been renewed for a second season, airs its Season One finale this Thursday at 8/7c on The CW. Who do you think Adams is playing from the DC Universe? Will Vandal Savage kill another Legend? Hit us with your speculations in the comments below.