Everything We (Currently) Know About Marvel Studios’ Phase Four

Marvel Studios upcoming 'Phase Four' might be their most ambitious slate yet. Let's take a look at what we currently know about it. 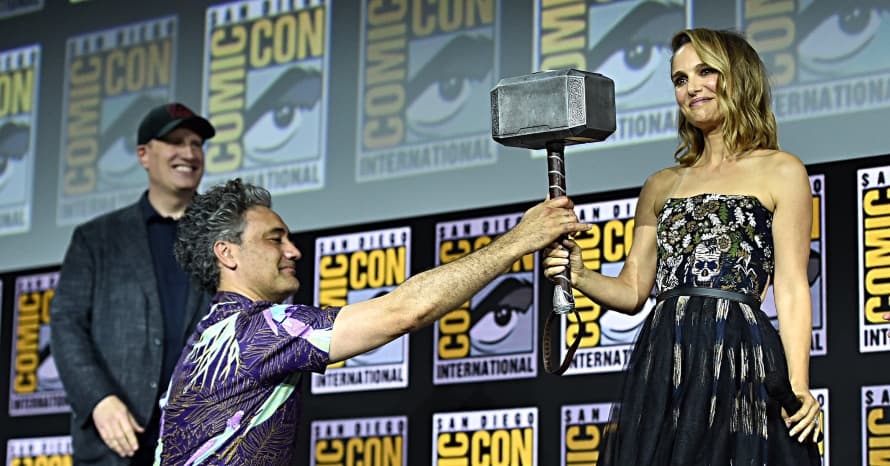 To say that Marvel Studios made quite the splash at this year's San Diego Comic-Con might be a bit of an understatement.

While many assumed we'd be getting an idea of what was to come in the next few years, studio head Kevin Feige took the stage and made some huge announcements about what's in store for Phase Four on both the big and small screen.

Let's take a look at everything we currently know about what Marvel Studios has in store when it comes to Phase Four...

Fans in attendance at the Marvel Studios Hall H presentation at San Diego Comic-Con got the very first look at the Cate Shortland-directed Black Widow. The first footage from the highly-anticipated film revealed some previously unknown details such as that the titular character played by Scarlett Johansson would be heading to Budapest and that the project would feature the live-action debut of Taskmaster.

Additionally, it was also revealed that Florence Pugh would be playing Yelena Belova, another product of the Red Room and a sister figure to Natasha Romanoff. Meanwhile David Harbour is on board as the MCU's version of Alexei Shoshtakov, who is known as Red Guardian and the Soviets' counterpart to Captain America.

The next film to hit the big screen after Black Widow will be the Chloé Zhao-directed Eternals. The film's incredibly diverse cast consists of Angelina Jolie as Thena, Richard Madden as Ikaris, Kumail Nanjiani as Kingo, Lauren Ridloff as Makkari, Brian Tyree Henry as Phastos, Salma Hayek as Ajak, Lia McHugh as Sprite and Don Lee as Gilgamesh.

While Marvel Studios revealed a majority of the cast during this year's San Diego Comic-Con, there are still a few key characters yet to be officially revealed. Hercules has also been heavily rumored to appear but no confirmation of the character's appearance has been made yet. Production on the film kicked off in July of 2019.

While details are currently under wraps, Marvel Studios' first event series coming to Disney Plus will be The Falcon And The Winter Soldier. Malcolm Spellman will serve as showrunner, with Kari Skogland set to direct all six episodes of the series which follows Avengers: Endgame and will reportedly deal with Sam Wilson as he assumes the mantle of Captain America. However, Sam is going to have his hands full with Daniel Brühl's Zemo, who was confirmed to return during Marvel Studios' Comic-Con presentation.

Though it has yet to confirmed, reliable sources have also been reporting that Emily Van Camp will return as Sharon Carter for the series.

The Falcon And The Winter Soldier will debut on Disney+ in the Fall of 2020.

Marvel Studios made a number of huge announcements when it came to the upcoming Destin Daniel Cretton-directed Shang-Chi And The Legend Of The Ten Rings. Not only did the studio reveal that Simu Liu would play the titular character but also that he would be joined by Awkwafina and Tony Leung, with the latter playing the Mandarin.

Not much is currently known about the plot of the film. However, it seems that it will partly deal with the fallout of the events of Iron Man 3, which we started to see in the One-Shot All Hail The King, featuring Trevory Slattery being kidnapped by a member of The Ten Rings. There's no word if Ben Kingsley will reprise the role in the film but it would be a bit of a missed opportunity if he didn't.

Shang-Chi And The Legend Of The Ten Rings is set to hit theaters February 12, 2021.

Many fans were curious how Loki would return following his fate in Avengers: Infinity War but Avengers: Endgame gave them a clue as to just how the character was going to cheat death in the Marvel Cinematic Universe. The series will apparently feature the titular character bouncing around different time periods after we last saw him disappear with the Tesseract.

Michael Waldron will serve as the showrunner and executive producer for the series. He will also write the pilot episode.

Details about the upcoming Disney Plus series WandaVision are pretty hush-hush at the moment. However, during their presentation at this year's San Diego Comic-Con, Marvel Studios head Kevin Feige revealed that the series will take place after the events of Avengers: Endgame contrary to what many had assumed due to The Vision's death in Avengers: Infinity War.

Elizabeth Olsen and Paul Bettany will reprise their Marvel roles in the series and be joined by Teyonah Parris, who will play the adult Monica Rambeau. Jac Schaeffer will serve as the showrunner and an executive producer for the series and will also write the pilot episode.

WandaVision will debut on Disney+ in Spring of 2021.

One of the most exciting things from Marvel Studios' Comic-Con presentation was the reveal of the Doctor Strange sequel, titled In The Multiverse Of Madness, a clear nod to Stephen King's In the Mouth Of Madness. Scott Derrickson will return to direct what he promises to be the Marvel Cinematic Universe's first horror film.

Elizabeth Olsen's Wanda Maximoff is also confirmed to appear with the film, which is connected to the Disney Plus series WandaVision. Pretty safe bet that we will also see Benedict Wong back as well.

Doctor Strange In The Multiverse Of Madness is set to hit theaters on May 7, 2021.

The first episode of the series will reportedly ask what if Peggy Carter had taken the Super Soldier serum instead of Steve Rogers.

Finally. After years of sorta getting "the shaft" in the Marvel Cinematic Universe, Marvel Studios revealed that Hawkeye, a limited event series starring Jeremy Renner, would be coming to the Disney Plus streaming service. And not only would the series finally give fans of the character what they've been asking for, but it would also introduce Kate Bishop to the MCU. Hopefully, Lucky The Pizza Dog is coming along for the journey as well.

One of the biggest things that came from Marvel Studios' Hall H presentation was the announcement of Thor: Love And Thunder. While it was reported just days before the panel, the studio confirmed that Taika Waititi was returning to direct Chris Hemsworth and Tessa Thompson in the fourth installment in the Thor series.

However, the biggest "hammer drop" was the reveal that Natalie Portman would be back as Jane Foster in the film. And not only is she reprising her role for Love and Thunder, but we will also see Jane Foster lift the hammer as The Mighty Thor, with the film drawing inspiration from the Jason Aaron run of the same name.

And considering the studio found a way around his death, it wouldn't be too surprising if Tom Hiddleston returns as well following the events of Loki. Hopefully, they haven't completely forgotten about Jamie Alexander's Lady Sif, though...