Its not unheard of to have studios create fun and imaginative pieces of media as a means of interactive promotion. Warner Brothers has done this very thing in the past with their viral marketing campaign for The Dark Knight, which provided fans with some cool Gotham newspapers and Harvey Dent Campaign posters, buttons, and stickers.

The latest bit of marketing from WB is now in the form of a Easter egg filled interview between Wired Magazine and Lex Luthor. In the interview Luthor touches on his political aspirations, his competition (Kord, Stagg, and Wayne), and even name drops A.R.G.U.S.

RON TROUPE: Would you say you’re a man who’s always gotten what he wants?

LEX LUTHOR: Nice pivot. Here’s mine: What I want is to leave the planet in better shape for the next generation. To make the world and its children safer. I want it. And I bet you do too, Ron.

RON TROUPE: You sound like someone running for political office.

LEX LUTHOR: If that matches their rhetoric, then maybe I should pay more attention to the candidates; I might want to back a few of them. The world is changing faster than we anticipated; we’ve all seen it. More than ever, we need leaders who not only comprehend the new threats facing us, but who will seriously and thoughtfully address them. 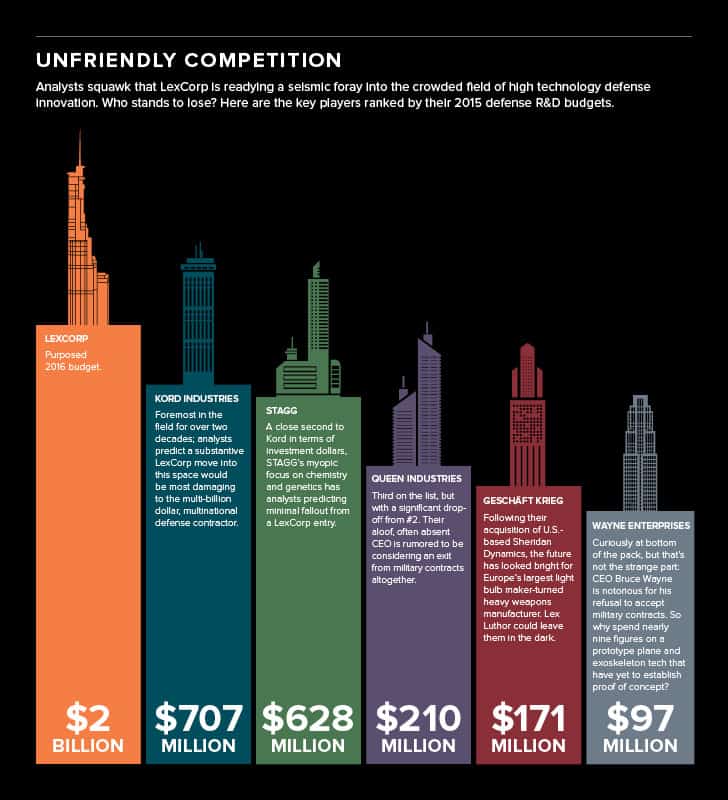 LEX LUTHOR: Look at it from the other side: today, there are more criminals than ever. If you’re a criminal, that means more competition. So if you’re going to survive in that economy, you have to be better; you have to edge out your rivals. Shouldn’t the same be true for those on the side of the law? If justice is going to survive in the new global paradigm, we have to get better, invest in new disruptive technologies, think outside Pandora’s Box. Who has the resources to do it? The government? No; the only thing holding that old purse together is a thick layer of impenetrable red tape. Vigilantes like the Batman? Not unless they have access to vast amounts of untold riches.

LEX LUTHOR: I’m not a vigilante.

The interview itself is a fun read, but it more importantly gives some fascinating background and insight on the new Lex Luthor that has everyone talking. If anything, this interview should show fans there is nothing to fear with Jesse Eisenberg. His Luthor is strong, smart, devious, and above all arrogant.