‘Once Upon A Time’: Season 6 Teaser Photos Feature Heroes At Crash Site

In the first look of Once Upon A Time Season 6, the Heroes are pictured exploring the crash site created by the Land of Untold Stories. 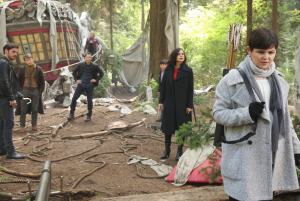 In the photos featured below (courtesy of ABC), the Heroes: Emma, Hook, Regina, Snow, Charming and friends are shown in the aftermath of the crash site.

When the show returns, Once Upon A Time creators promise to dive into what happened to residents of the Land of Untold Stories. They described that they either hit pause on their lives or had their lives put on pause for several different reasons – including fear. We will see how their tales resume and how they react.

The premiere episode is titled “The Savior”, appropriately. Per the show’s official synopsis:

As our heroes set out to stop Hyde, Emma develops a mysterious side effect, and Storybrooke becomes a haven for refugees from the Land of Untold Stories. Meanwhile, Regina and Zelena embrace their newfound sisterhood by becoming roommates, while Rumple tries to free Belle from the sleeping Curse with the help of a stranger. In flashback, Jafar confronts an afflicted Aladdin in Agrabah, and a secret about the Savior is revealed.

Once Upon A Time returns to ABC on Sunday, September 25th. We will be recapping each week for all of you Oncers, so stay tuned!

Check out more photos below!