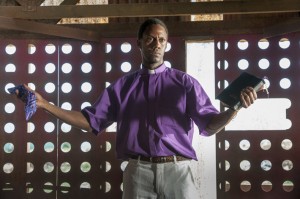 Preacher needs to let you know, right off the bat, that you’re in for some weird ass shit. And how better to do that then to start your new show somewhere in the heart of space, following some weird, almost undetectable comet whizzing its way through the galaxy and into our solar system, before landing in Africa and straight into a practicing priest — who feels as though he’s filled with the power of the spirit at last before he combusts onto his followers, with them all running and screaming out of their wits out of their small little congregation. It’s a commanding, surprising and, most of all, darkly funny opening, and one that wouldn’t feel too out-of-line with something we’ve seen from the directors behind This is the End.

It’s also the kind of cold opening that lets you know exactly where you stand with everything set to come. If that was too weird and out-there for you, maybe Preacher isn’t going to be your thing. If that’s the kind of nonsensical insanity you love, prepare yourself for the time of your life. Because it doesn’t give a damn if it’s too weird or insane for your tastes. It’s going to be exactly what it wants to be, and, personally, I like it quite a bit. Also, that cross on top of the church turning upside before it hit the ground? Very nice touch, boys. Keep it up.