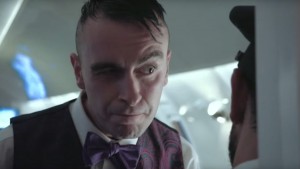 I already mentioned Cassidy’s last fight, but I’m having a hard time figuring out which one I liked more: that one, or this one. And it’s not an easy choice, because they’re both pretty splendid in their own right. Shooting us three-thousand feet in the sky — just as we’re shown a montage of snort coking, boozing and sucking up other illegal substances that’s not unlike others we’ve seen from Rogen and Goldberg’s past work — we’re immediately thrown into the mix with a ton of characters we don’t know, not sure if we want to know and, eventually, won’t know — at least, for the most part. It’s a kinda risky script-flip, and I applaud Rogen, Goldberg and Catlin for pushing forward with it without reservation. And the fact that it actually kinda works only makes it sweeter, and the show better, as a result.

Because just as soon as we settle in with these clowns, we see them obliterated one-by-one by a guy whom we just realized, surprise-surprise, is a vampire. And one that likes to take a nice bottle of fresh blood for the road (or, more appropriately, sky) before he jumps thousands of feet in the air. Without a parachute.  It’s a turbulent little scene, in more ways than one, and it’s very well handled and never less than entertaining. And it suggests Goldberg and Rogen are ready to move away from their pot-smoking association — if just a little bit. The only time a bong gets introduced in any scene, we see it smashed against someone’s face before he gets stabbed a couple more times for good measure. Are they trying to tell us something here? It sure seems like it to me.