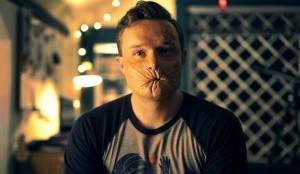 Bringing the character of Arseface to life was easily the biggest challenge in Rogen, Goldberg and Catlin’s wake here. His shotgun-inflicted wound may be too grotesque for TV censors if done too much (but, then again, this is AMC we’re talking about here). But if not done well enough, it would completely alienated the readers. And it would probably stop the show dead in its feet along the way. So they knew they had to settle somewhere in the middle and, thanks to some lovely make-up work from the legendary Greg Nicotero, they pull it off handsomely. Well, not handsomely per se. But exceptionally well, for sure.

And beyond the stellar make-up work involved, it would be nothing is the man behind the prosthetics didn’t make it come to life in the process. But they didn’t have to worry about that, because Colletti brings a great depth of warm and sympathy to his performance with each fragile-eyed glance. It’s a touching, deeply-felt performance, even if we only get to see a brief moment of it, and it’s not hard to imagine he’ll become the heart of the show in no time. He already wins you over here, and if he doesn’t, you might be an asshole.

That’s it for this week. Thanks so much for reading. I hope to see you again in two weeks, when the second episode premieres. Until then!