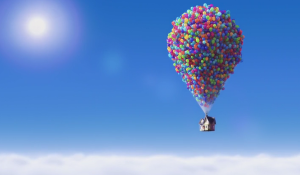 Up is noticeably more adult and somber than your average Pixar movie, but that’s what happens when you make your animated family film centered on a curmudgeon old man with a floating house. But packed with all the astounding emotional cues, exhilarating action and endearingly colorful characters you’ve come to know and love over the years, it’s exactly the kind of film Pixar does best. Smart, quick-paced, impactful and grounded with harsh realism amidst all the playful whimsy, it doesn’t get celebrated as often as it should, and that’s a shame. Because Up has no problem standing toe-to-toe with its studio peers, or sometimes soaring above them entirely — even if it has a little more sorrow in its eyes and a little more weight in its step. It’s a beautifully realized, genuinely moving film every step of the way, and even when the climax gets a little too silly for its own good, the Pixar team still finds a way to keep it all afloat with grace, levity and a keen sense of awareness.

And yes, this is one of those times where Pixar peaks with their first ten minutes, and it’s a great first ten minutes. Maybe among the best in cinematic history, in fact. But to dismiss the rest of the film because it fails to live up to that level would be a fool’s errand. Up never lets itself fall to the ground at any point. It’s constantly finding exciting and endearing new ways to keep everything buoyant and meaningful. There’s hardly ever a false step or a miscalculation in the process. And while it doesn’t often rise to the top of people’s list, it should be elevated a little higher than it’s often regarded.