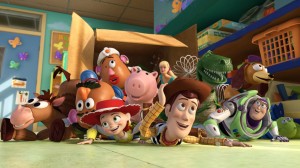 When Toy Story 3 was first announced, it was hard to know how to react. Yes, the last two films were excellent, but how will this one compare? Could it possibly live up to the standards set before? Will it tarnish all the goodwill we felt for the series prior? Will it matter that it’s been 11 years since the last time we saw these beloved characters on the big screen? Needless to say, we never had to worry. Toy Story 3 was always in good hands, and as a result, it remains not only one of the best sequels ever made, but the perfect capper to one of the best trilogies in cinematic history, bar none.

Building on the themes established in the film prior, it’s a masterfully crafted exploration at early adulthood and warmly woven tale about accepting one’s place in this world, as well as learning how you’ll always be loved, even if you’re not always needed. While often mournful and piteous in its themes, among its greatest feats is how it’s able to take these heavy ideas and apply them to a film that’s always rousing, exciting and heartfelt in its execution, while never losing the value of its messages. And while the third film in this series is laced with nostalgia for itself throughout, almost to its determent, its uses that history and time to inform its characters and their value to one another, therefore making its gooey center also act as its rock-hard core. We’re then left with what’s undoubtably a one-in-a-million franchise, and one that we should always value. At least, unless Toy Story 4 ruins everything. But considering the studio’s track-record with the series, there’s reason to stay optimistic.