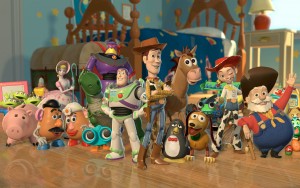 I went back and forth on this one a lot. Picking your favorite Toy Story movie can feel like choosing your favorite child: it’s practically impossible, and nobody wins. Nevertheless, when push comes to shove, I usually always go with Toy Story 2 over 1 and 3. Even though they’re all brilliant in their own right, Toy Story 2 is what I’ve considered the happy medium of the trilogy. It contains all the warm lightheartedness of the original along with the sweetly-realized gravitas found throughout the third film to produce a sequel only Pixar could make so well. It’s funny but also very, very, very emotional, heartwarming and heartbreaking, touching and thoughtful in its themes on family, commitment and accepting that the ones we love will get older, even if we’re not ready for them to move on.

It’s as funny and entertaining as it is deeply touching and moving, without ever getting too goofy or corny in the process, and that’s a very hard balance to achieve, even by the great minds at Pixar. Jessie’s flashback origins montage, in particular, still remains on the strongest scenes the animation company has ever produced. It’s hard to watch it without getting a least a little lump in the throat. My eyes water just thinking about it. Toy Story 2 is made all the more impressive by how well they balance their characters, both new and old, while never losing track of the more action-orientated and mature story. It’s about as good as sequels come, a film that’s not only great as a continuation of the series, but one of the best films Pixar has ever made, and maybe will ever make. Even though Pixar has gone infinity and beyond a number of times in their 25 year career, this is undoubtably one of their brightest shining moments.