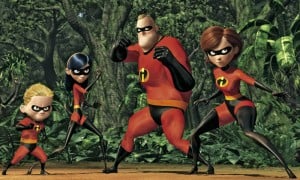 Brad Bird’s The Incredibles is not merely one of the best superhero movies ever; in my eyes, it is the best. No other superhero film, animation or live-action, has combined the heroic highs-and-lows of being super-powered with this much honesty, weight, smarts, humor and heart. It’s at once a towering look at modern family dynamics and a wickedly sharp commentary on the state of superheroes, soaring high based on its inspired voice cast (Craig T. Nelson is excellent as Mr. Incredible, while Holly Hunter continues her hot streak as his supportive wife and mother of their kids), revolutionary animation and sharp-as-a-speeding bullet writing. All that comes together to form a superhero film nobody can beat.

And at a time when Fox is struggling mightily to put together their first good Fantastic Four movie, Pixar has been sitting around waiting for them to catch up. Indeed, at its heart, The Incredibles is the one and only good FF movie in our universe, even if none of the characters share the same origins or name of Stan Lee’s iconic characters. That’s because Pixar wisely lets us trust the characters, rather than simply tell us everything that happens on screen. The result is not only their first PG movie, but easily their most mature and adult-orientated film to date, packed with emotional poignancy that would go well above the heads of children until the time was right. Fearless, fresh, fitfully entertaining and full of life, The Incredibles is a super great film, for more reasons than one. And to this day, it’s one of those movies I have no problem watching from beginning-to-end whenever it’s on TV. Packed with tons upon tons of entertainment, as well as thoughtfulness and heart, it’s an high-flying masterpiece that officially proved Pixar is in a league well above their peers.