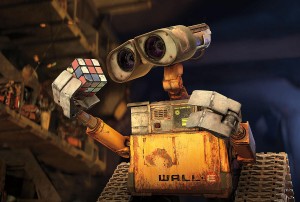 There have only been a few movies that left me temporarily paralyzed in my seat, transfixed by what I witnessed and refusing to let me divorce myself from their sheer excellence. But WALL-E was one of those movies. Andrew Stanton’s Finding Nemo follow-up is a masterful tour-de-force, a defining benchmark for the power of modern storytelling, not merely the power of modern animation, that’s amazing in every conceivable way. The first 20 minute alone remain the best filmmaking the studio has produced to date, and no film in history has used the soundtrack to Hello Dolly! better. Not even Hello Dolly! But you’ll be hard-pressed to have me say too many negative things, because I have no qualms considering it a near-perfect film. I could celebrate this movie for days upon days, and I probably have done just that before. Since I’ve seen it, it has unquestionably become not only my favorite Pixar movie, but one of my favorite movies of all-time, animated or otherwise. It’s a film I’ve come to cherish more over time, a rare ruby gem amongst a treasure trove of excellence, and I doubt I’m going to turn around on it anytime soon. It’s a big world out there, but I love to know there’s someone as close as my little robot friend to keep me through it.