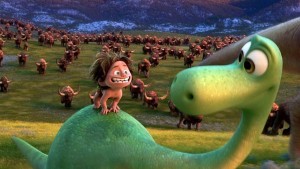 Several Pixar movies have their fair shares of ups-and-downs, especially these past few years. With The Good Dinosaur, however, the studio makes their first consistently average film. Beyond the always-stellar animation they bring to the forefront, there’s nothing to distinguish their 16th animated feature from any number of CG-animated films of late, let alone the better films the studio has made before. After an extremely interesting premise, “What if the meteor missed and dinosaurs didn’t go extinct?”, the wishy-washy family feature goes through-the-motions to focus on an insecure child-dinosaur who must prove his worth after his father is killed and he’s left astray from the rest of his family. It’s neither an original nor interesting story, and it doesn’t help that the main character isn’t all that likable or sympathetic to begin with. And boggled down by a run-of-the-mill return-home road trip story, it’s one of the few times where you wished the supporting character — Spot, the animalistic caveboy — was the real main character, since he’s much more lively and attentive than our wimpy lead, despite never uttering a word.

But it’s not all bad. There are some genuine moving moments, the kind you come to expect from Pixar. The richness of their landscapes and designs is always present, and it’s evident the animators had some fun, particularly during a wholly out-of-the-blue drug sequence mid-way through. It’s just a shame that, with such a great, interesting premise, they had to settle for such a generic story. There were more-than-a-few reported problems on this one, and it kinda shows. It’s not as bumpy as you would think, but it lacks that spark, that big bang that makes the best Pixar movies such instant classic. As a result, even with some of the best animation in the world, The Good Dinosaur comes across a little too prehistoric to stand toe-to-toe with its peers.