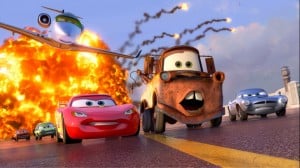 I’m going to be honest: I don’t hate Cars 2. In fact, I actually sorta, kinda like it. Now listen, it’s far from their greatest film. Even a dumbo like me knows that. It does deserve some ire thrown its way. It’s a messy, commercialized, annoyingly by-the-numbers spy parody centered around a one-time supporting character that has no real right to have his own film. That character in question would, of course, be Mater, voiced by Larry the Cable Guy, a.k.a. Dan Whitney. And its release officially marked the end of Pixar’s golden era, a time when hit after hit after hit suggested they were here for the long haul. But with all that said, what’s most enjoyable about this Cars sequel is how refreshingly simple it can be, much like it’s main character.

To put it bluntly: this 2011 sequel lacks the invigoration, that spark, that made the previous Pixar films so stupendously good. But there’s still enough clever visual gags and enjoyable character work to make it all worthwhile. And Cars 2 is decidedly a straightforward summer movie, even though it should have been a little more. I’m hesitant to call it a bad movie, like so, so many of my peers, since I believe there’s some punchy humor and well-crafted action sequences to make it all worth the time, money and effort invested. But it’s evident this Pixar vehicle could have used some more fuel.