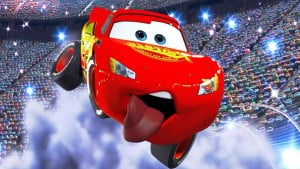 While Cars isn’t necessarily a bad film, for Pixar, it’s a weird use of resources. While developing a universe filled with humanoid automobiles with expressive faces and motormouths is no stranger than some other films in this list, John Lasseter’s long-brewing passion project never quite justifies its existence quite as well as they did. There are always so many questions left unanswered, like, “Was this a human world that was overtaken by cars, AI-style, or did cars always run this world?” Or, “If this is, indeed, a car world, were the cars created by someone, like a car God, or did they simply exist?” Or, “What would a car god be like? Would He be a bigger car, or is he simply just a god who watches over self-driving cars?” Or, “If there is a god in this world, how does he make the cars? Does he have a giant factory in the sky? Does he simply will them into existence? Does he use parts from used cars to make new cars?” Or, “do cars in this universe grow up, or are they simply born as adults?” I’ll spare you the next 50 questions; I think you get the general idea. Nothing makes a lick of sense, but that’s okay. It doesn’t really need to, so long as the story is interesting, the characters are entertaining and the world is interesting. And how does it fair by those standards? The answer: good enough.

The characters range from good-to-bad, as some are little more than irksome stereotypes, while others are genuinely pretty compelling personalities, like Doc Hudson, voiced by Paul Newman in his final role. The world itself is inspired and often amusing in its conception, but at the same time, it’s not as funny, interesting or lively as the ones in, say, Toy Story, The Incredibles and/or Monsters, Inc., just to name a couple relative examples. And the story itself is basically just Doc Hollywood with talking vehicles. What results, then, is a production that’s not necessarily poor, but failing to reach top gear. Is that a proper car analogy? There are some well-observed character moments, some beautiful imagery (as always) and tons of noteworthy visual gags, but it’s ultimately a lesser effort for the animation company, and an unexpected sign of what was to come in the next decade.

Cars 3, for better or for worse, is set to become our 18th Pixar film, and we’ll have to wait until next year to see how it holds up. Unless, you know, you skip it. In the meantime, however, the Cars films are not among the best the studio has produced, but they’re not quite as bad as some people suggest either. I mean, I would much rather watch them before I’d view the Hotel Transylvania films again, revisit the Ice Age sequels or watch the Open Season “series.” I suppose that’s something to ram its engine.