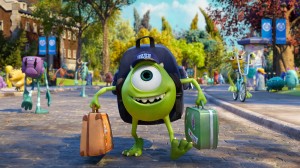 As I’ll note a little later done in this list, there was no real need for us to learn about Mike and Sully’s backstory. Everything we needed to know was already felt in the first movie. But Pixar, now officially in the sequel, prequel and anything in-betweenquel phase, decided it was time to dust off that old story and see what they could dig. The result? A prequel that’s funny, likable and appealing on its own right, but one that doesn’t quite capture the charm and sophistication of the original. For the most part, it’s a silly wink at the ’70s/’80s college party movie. You know, your Revenge of the Nerds, your Animal House, your Back to School, what-have-you. It’s odd to see this kind of satire directly largely at children but, hey, why question Pixar now? They (usually) know what they’re doing, so why mess with the method?

At worst, Monsters University is kinda bland. It’s still a good movie, especially towards the beginning and most especially towards the last act, which is simply terrific and genuinely filled with a couple surprise twists. But it’s that middle act that just sorta, you know, settles — particularly by Pixar standards. Like a fazed-out college student living their days on ramen noodles and some local agriculture, this film tends to have a habit of coasting by, making the most with “pretty good” when it could strive harder for excellence. It is fun to see Sully and Mike during their early years, but at the same time, there’s no real hard-hitting conflict because we know they’ll get together in the end. That’s the danger with prequels, and often with ones like this one, you have to settle for time devoted towards setting up characters and actions to come, even if they don’t really have an impact on the story-at-hand (Randall’s origins come to mind here). It gets a little annoying at times, but such is the territory.

Nevertheless, while never living up to the high standards of the original film, Monsters University puts in some extra credit hours in a few unexpected areas. It might not graduate with cuma laude, and it won’t remembered as one of Pixar’s all-time classics, but it still gets good enough marks to pass the class.