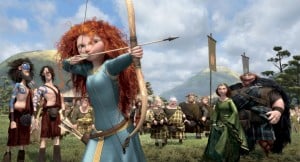 To its credit, Brave starts out exceptionally good, on par with the best films the studio has put together. There’s a strong, self-dependent woman at the forefront (nice!), there are some gorgeous shots of animated Scotland and there’s some interesting mysticism carrying it along. Unfortunately, once it reveals its hand and goes the course with its paint-by-numbers mother-daughter fable, any and all intrigue fizzles out like a broken helium balloon. Our lead character becomes less reliable, the animated scenery is now familiar to our eyes and the cards have been dealt. There was some behind-the-scenes controversy where one director, Brenda Chapman, was pushed out and another, more “reliable” director, Mark Andrews, was put in her place, and much like The Good Dinosaur, you can see how the story was simplified and somewhat awkwardly misshaped. What starts out as an interesting new take on princesses quickly becomes a banal reconnection story without anything exciting or interesting to fire it up. And while it might be called Brave, that sounds like a kinda cowardly thing to do.

Nevertheless, there’s something just sweet and compassionate enough that makes you never completely give up on the film. It’s attentive attention to folk lore and traditionalism always remains interesting, and it’s often neat to see how actual magic factors into their storytelling methods. It’s a bit of a disappointment, especially when you think of what it could have been, but it’s not a miss either. It might not be a bullseye, but Brave hits the mark to make it on the board. But you can’t help but want a little more magic.