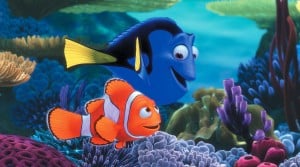 Is Finding Nemo a good film? Sure. Is it a great film? Not really. At least, not to me. To be honest, while I’ve come to appreciate Andrew Stanton’s film more over the years, I still tend to find it a little overrated in the Pixar cannon. Not that I’m fighting against it; I’m just not as taken by it as many, many, many, many, many, many, many, many others have been since its release. The underwater adventure hits all the right notes: the sea environment is fresh and fascinating to discover, the characters are mostly likable and entertaining (give or take Dory) and there’s a nice beating heart at the center of this father-son tale that graciously takes you through the tide. But with that said, the jokes are often cornier than they are in other, better Pixar features, and the message, while deeply-felt, doesn’t resonate as much as some other Pixar movies in the past. I don’t know, maybe I’m just alone on this one. Maybe not. The animation company has a wide net of great films at their disposal. Finding Nemo is just not my ideal first catch. With that said, however, I’m not going to throw it back into the ocean anytime soon either.