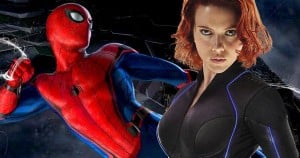 The cast list seems to continue to grow as the days come and go for Spider-Man: Homecoming. We got to see the majority of the cast together at San Diego Comic-Con last week, minus actors such as Robert Downey Jr. and Michael Keaton. The news of Iron Man appearing in this new Spidey flick got all of us fans roaring in hype, there has also been rumors of even Captain America himself making an appearance. I’d love to see Parker get a tour of Brooklyn by Cap or Cap get a tour of Queens by Parker personally. Though all that may be speculation we got some more news to speculate on.

It seems another Avenger may be popping by to support our webslinger. According to a tweet from Atlanta Filming (@atlantafilming) a very ominous tip was given to us.

This twitter account has been posting many photos of the set of Spider-Man: Homecoming recently and although there is no photo proof to support this it could be safe to assume Scarlett did indeed show up on set. That being said, it still doesn’t mean she will actually be in the film. She could just be dropping by for a “Hello” for all we know. This wouldn’t be the first time other Marvel Universe cast members dropped by on sets to films they’re not in. Although, you can’t deny a cameo would be great of Black Widow showing Peter a few new moves and I think everyone at Marvel Studios knows that.