The castle in question first appeared in the 2016 film, Rogue One: A Star Wars Story. The castle, oddly enough, was on the same planet where Darth Vader had his final duel with Obi-Wan Kenobi in Star Wars: Episode III-Revenge of the Sith. In Rouge One, the film’s main antagonist, Orson Krennic, went to Darth Vader to gain his help against Grand Moff Tarkin but was never mentioned again.

Charles Soule’s run on the book has been primarily dedicated to being the bridge between the infamous “I don’t like sand” Anakin Skywalker from the Prequel Trilogy to badass, Dark Lord of the Sith we all know and love from the Original Trilogy. This has included an explanation on how Darth Vader obtained his first red lightsaber, the hunting down of the Jedi who survived Order 66 and going deeper into just why he joined the Dark Side to begin with. In addition, it also gives us answers as to why he decided to build his house on Mustafar to begin with.

This latest issue the book reveals his true reason behind putting his base in such a morbid place. In the first image shown, it is revealed that in the depths of the castle is what is described as a door to the Dark Side. Apparently by going through it, Darth Vader will be able to meet with the soul of Padme.

You can see the full images below: 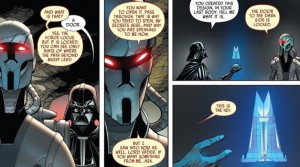 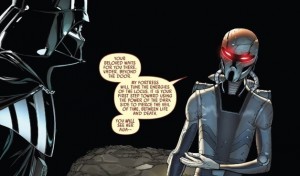 What do you all think of this latest reveal? Are you interested in seeing Darth Vader get more depth as a character or would you have preferred him as an unknowing mixture of evil, machinery and man? Let us know what you think in the comments below!