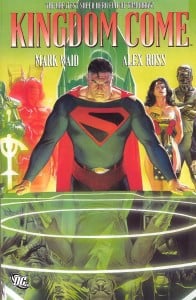 Not all of Batman & Superman’s fights have been fist fights, and Kingdom Come proves what could happen if their differences resulted in a full scale war.

The set up: A strong Elseworlds story that is set in a future that deals with a growing conflict between the visibly out-of-touch older “traditional” superheroes, and a generation of largely amoral, dangerous, and irresponsible new vigilantes, which many of them are actually the offspring of the traditional heroes. This story escalates when Superman returns to the world of crime fighting and is eventually met with opposition by Batman and his legion of “Outsiders.”

Why it made the cut: This story sets up a wonderfully terrifying alternate future where Superman gives up crime fighting after the death of Lois and Batman has traded in his cape and essentially becomes Gotham’s “Big Brother” thanks to the use of Giant Robotic Bat-Sentries. When Superman returns to the world of crime fighting, their history of disagreeing becomes all the more potent. Batman eventually even allies himself with Lex Luthor, a decision that he later regrets and their feud almost brings about the end of the world.

Winner: Stalemate…(but who are we kidding, Superman ended it) – The world is almost brought to its end, and the heroes cease fighting in order to preserve human life.