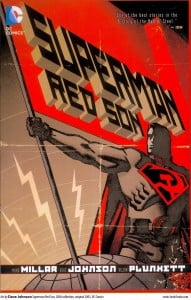 The critically acclaimed Elseworlds story shows a dramatically different take on our favorite heroes, but this Batman isn’t limited by a rule to not kill, and will stop at nothing to get the job done…even if it means sacrificing his own life.

The set up: In Superman: Red Son, Superman’s ship lands on a Ukrainian farm rather instead of in Kansas. Instead of fighting for “… truth, justice, and the American Way”, Superman becomes the “Champion of the common worker who fights a never-ending battle for Stalin, socialism, and the international expansion of the Warsaw Pact.” While his “secret identity” is a state secret, Superman moves up the ranks and eventually becomes a dictator who draws the attention of Lex Luthor and Batman, who both desire to stop him at all costs for the good of humanity.

Why it made the cut: Although this story is set in an alternate reality, it captures the soul of these characters perfectly. Batman is a cunning master planner, using a red sun emitting lamps to level the playing field and beat him to a pulp with his bare hands, and when it looks like the tables have turned, Batman pulls a finishing move that makes every reader scream. This comic shows how dedicated Batman can be when it comes to taking down what he perceives as the ultimate evil in the world.

Winner: Batman….until Wonder Woman intervenes and Batman eventually kills himself with a suicide bomb as a last ditch effort leaving Superman as the surviving winner.