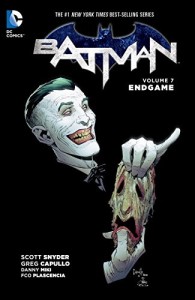 Once again Batman is pitted against a brainwashed Man of Steel, but unlike his previous fights, Superman isn’t alone. This relatively new fight comes from the mind of Scott Snyder, and answers the question “How prepared is Batman to take on the entire Justice League if he needs to?”

The set up:  Batman: Endgame involves the return of Batman’s arch-enemy, the Joker, following his disappearance in “Death of the Family.” The Joker masterfully announces his return by  manipulating the Justice League into killing Batman. To combat the attack, Batman instructs Alfred to enact plan “Fenrir”, which deploys a large robotic-armor designed by Batman to combat and defeat the entire Justice League.

Why it made the cut: This fight once again shows how ridiculously over prepared Batman is. Not only does he win against 4 major players of the JLA, but he does so by using a suit of armor that is built for that express purpose and even does so without endangering any innocent citizens. When it finally seems like Superman has the upper hand, Batman spits a piece of Kryptonite laced chewing gum into Superman’s eye, which drops him immediately.

Winner: Batman. Despite Batman outright declaring that nobody “won” the fight, he successfully takes down the Justice League which consisted of Superman,  Wonder Woman, the Flash, and Aquaman.