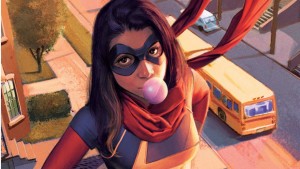 Clocking in at number four we have Ms. Marvel. While she’s a relatively new character, she’s already a fan favorite. Although it’s been rumored that a show is being worked on for her over at ABC and she’s considerably brighter than what Netflix is doing currently, there is no reason the Netflix shows can’t have a mix of darkness and levity. I also don’t trust ABC to do justice to her power set, as her shape shifting body parts would likely look laughable on cable television– just think back to Atom Smasher on Flash this past season. Her power set and bright outlook on the world also factor in to the diversity I mentioned in the introduction, let 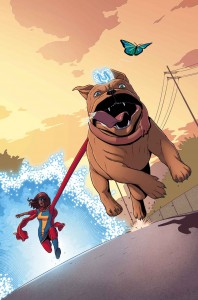 alone her being a female Pakistani Muslim, and would be a welcome addition to the Netflix platform as a more family oriented series.

Ms. Marvel would also heighten the connections between various parts of the MCU as Kamala Khan is an Inhuman, something we’ve only seen on Agents of S.H.I.E.L.D. thus far. And should Lockjaw appear as he did in the comic series, it would mark the first superhuman pet to appear in the MCU, as well as the third superhuman animal after Rocket Raccoon and Howard the Duck. A Ms. Marvel series would also continue to breath life into the Marvel Universe by showing that not all superheroes are in Manhattan, even if Jersey City is pretty damn close by. Her being close to the city would still allow for interactions with other characters, but feel refreshing by giving us a new neighborhood to dive into.