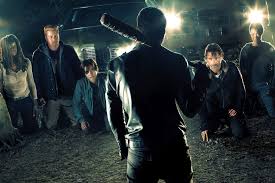 Show Synopsis: Sheriff’s deputy Rick Grimes awakens from a coma discovering a world overrun by zombies, commonly referred to as “walkers”. Grimes reunites with his family and becomes the leader of a group he forms with other survivors. Together they struggle to survive and adapt in a post-apocalyptic world filled with walkers and opposing groups of survivors, who are often more dangerous than the walkers themselves.

Last Season: The community faces a food shortage when they meet Jesus, who invites them to trade with the Hilltop. Offering mercenary services in exchange for food and medicine, Rick leads a team to wipe out a nearby compound of the extortionist Saviors and executes a man claiming to be their leader, Negan. However, the Saviors remain a threat and seek to take prisoners as leverage against Alexandria. Extremist Carol is saved by pacifist Morgan when she flees to resolve her troubled conscience in death. Maggie suffers pregnancy complications and Rick’s group try to get her to the Hilltop but find Saviors waiting for them and eventually walk into the middle of the gang psychologically defeated. Forced to their knees, Rick’s group listen to Negan who chooses one among them to be punished for their actions.

What to Expect in Season 7: The most anticipated thing about the show’s return is finding out exactly who Negan killed with Lucille after Season 6’s cliffhanger ending. We’ll also be introduced to the Kingdom, whose members were briefly introduced at the end of last season offering help to Morgan and Carol. The leader of the Kingdom is King Ezekiel, who is helped by his pet tiger Shiva, both of whom have been confirmed to appear (yes, an actual frickin’ tiger).

Trailers: You can watch the main trailer revealed at SDCC here, and a recently released Negan-centric trailer embedded below.