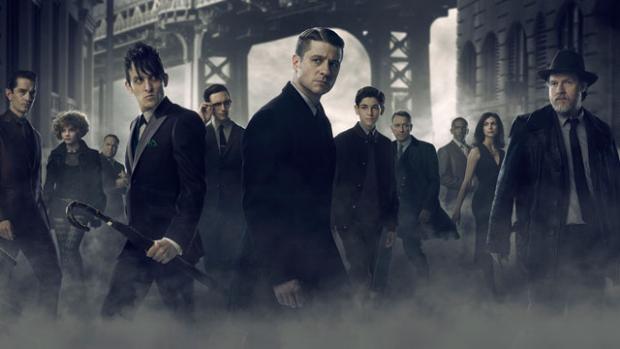 Show Synopsis: Season Three will peel back the curtain on the infamous criminal organization known as the Court of The Owls. With the Indian Hill escapees on the loose, JIM GORDON must take matters into his own hands as a bounty hunter in Gotham. He makes it his mission to find HUGO STRANGE, the mastermind behind the horrifying Indian Hill experiments, and FISH MOONEY, one of Strange’s subjects. Meanwhile, GCPD Detective HARVEY BULLOCK and Captain NATHANIEL BARNES remain at the forefront of the fight against crime in the monster-ridden city. Also, BRUCE WAYNE, with the help of his trusted butler and mentor, ALFRED PENNYWORTH, and former Wayne Enterprises employee, LUCIUS FOX, discovers there are still more secrets to uncover regarding his parents’ murders.

As the city sinks deeper into chaos, GOTHAM will continue to follow the evolving stories of the city’s most malevolent villains: THE PENGUIN; EDWARD NYGMA/the future RIDDLER; SELINA KYLE/the future CATWOMAN; BARBARA KEAN, TABITHA GALAVAN/TIGRESS and BUTCH GILZEAN. The series also will catch up with the future POISON IVY, who, after an encounter with a monster from Indian Hill, finds herself reborn as a young woman who’s harnessed the full power of her charms; and will dive into the origin stories of JERVIS TETCH/MAD HATTER, a talented hypnotist teetering on the edge of madness; and the TWEED BROTHERS.

Last Season Finale: Basil, disguised as Gordon, pulls the GCPD off of Arkham. In the basement, Strange prepares to detonate a bomb and tells Ms. Peabody to transfer the patients to the other facility. Barbara reveals that Basil is a fake and Bruce and Lucius find themselves in the same room as Gordon. Mooney gains control of Peabody, but Strange sets the countdown for the bomb under the White-Haired Lady’s orders. With Nygma’s help, Gordon and Lucius stop the bomb, and Mooney escapes in a bus. She encounters a shocked Penguin on the street and knocks him out, prompting Butch and his gang to flee. In the aftermath, Strange is arrested, Gordon leaves to find Lee, Bruce tells Alfred of his plans to find the secret council that wants him dead, and Bullock is trusted to protect Gotham. In the end, an old woman opens the rear door of the abandoned bus and Strange’s monsters begin walking through Gotham. One of them, a boy that has an identical facial appearance to Bruce, thanks the woman for freeing them before walking away.

What to Expect in Season 3: The season is subtitled ‘Mad City‘ and will feature the influence of villains and superpowered people rising in Gotham City. The season will introduce the characters of Mad Hatter, the Tweedle brothers and Solomon Grundy, as well as potentially Killer Croc and Harley Quinn. It will return to the idea of the Joker legacy introduced with Jerome’s death in Season 2. The mythology of the Court of Owls will be explored and at least one talon will appear. Valerie Vale, the mother of famous reporter and occasional love interest to Bruce Vicki, will appear in the show played by Jamie Chung. Carmine Falcone’s son Mario will be joining the show, with a big interest in Leslie. The titles of the first 3 episodes have been revealed, which you can read here.

Trailers: Numerous trailers promoting the show have been released. You can check out the SDCC trailer here, a trailer titled ‘Monsters are Coming’ here and the final trailer, entitled ‘Nothing Else Matters’ embedded below.