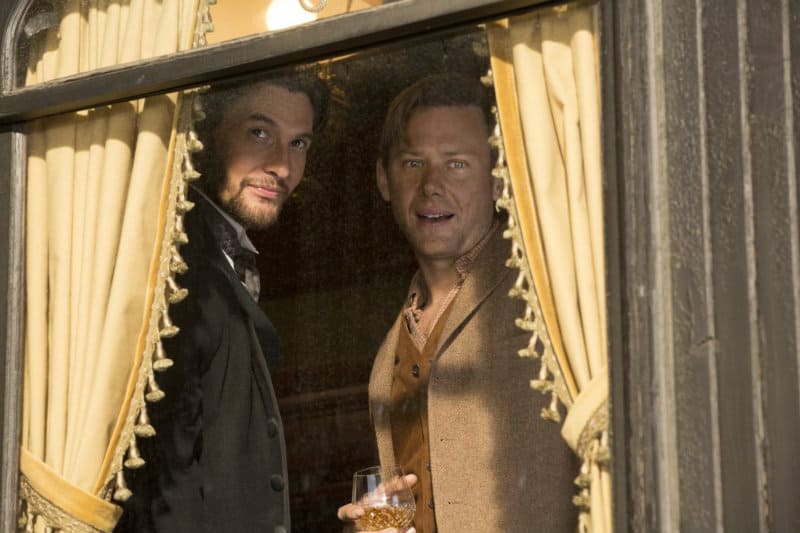 HBO did us all a solid and released the second episode Westworld two days early! Chaos was a big theme this week as "Chestnut" continued brilliantly laying the groundwork for this ridiculously complex and layered series. Like filtering for gold, with the silt settling, there are three emerging storylines wrapped up in this A.I. tale: the hosts and their awakenings, the Westworld company staff, and the human guests who wander in.

This week, it was Thandie Newton's Maeve who was the host experiencing rudimentary consciousness while Bernard and Ford waffled on these "glitches" behind the scenes. Meanwhile, we get to see the park from the perspective of the guests for the first time (after the premiere did an initial fake-out with host Teddy), played by Ben Barnes and Jimmi Simpson.

Click Next to begin the review, or click on which part of the review you'd like to check out! My review of the premiere episode "The Original" is here. William is a Westworld newbie brought by his work friend Logan. Everything from the train they ride to the mountain facility they arrive at reminds me of the past/future contrast in Assassin's Creed, especially when we get to see them take another train into the park itself, which is a literal Open-World Sandbox a la Skyrim. And, like that RPG and so many others, there's a near-infinite amount of "quests" to do. Even Logan, for all his visits, hasn't explored everything or reached the "end" of the park.

On a guest scale of 1 to the Man in Black, Logan is a 5, a slave to the hedonistic desires and remorseless action he can take in the virtual reality. William on the other hand is shyer and more reserved. Notably, he chooses to wear a white hat, a visual cue for the good guy that William is or wants to be. Westworld the show and the fictional place are arenas to act out storytelling. It's a constant reminder how much stories play in our lives, whether we call them truths or lies, non-fiction or fiction, they are the template by which we shape our own realities. Westworld is a physical manifestation of that most human perception.

The episode plays the two's contrasts to the hilt, making one wonder why these two are friends in the first place. Indeed, when William is alone with Clementine (Angela Sarafyan), he says he wouldn't even call them that. Still, Barnes and Simpson are great actors (though tough to see as anything other than Prince Caspian and Liam McPoyle) and they do a great job for what are essentially expository roles in this particular episode and I hope we dig deeper into this "friendship" in the future, if only to keep the actors around.

I will admit fear for Simpson's character, who ends the episode taking a shine to Dolores (Evan Rachel Wood) in a cute, clean way. The interaction is in direct contrast to a similar one with the Man in Black. My guess is naive, helpful William will help her on her way to full consciousness. But that will put him in the Man in Black's crosshairs, since he views Dolores as "his" after 30 odd years of rape and torture? As for what will happen to Logan? I hope something poetically just (i.e. nothing good).

The MVP of this hour was Thandie Newton, whose character Maeve, the brothel madame, went through several behavioral modifications as the Westworld lab continues to grapple with these glitches. It's a delicious opportunity for any actress and the notoriously-underutilized Newton does a great job showcasing the human as a machine and, more crucially, the machine as a human.

The show tells us these consciousness-sparking glitches are because of an updated code entered by Ford (more on him next), which are causing the robots to cycle through their hard drives (their "memories") to make them appear more human. As Maeve shows, they're moved beyond appearance and into actual personalities, bubbling beneath the surface, the ultimate "fake it till you make it" exercise.

Maeve isn't attracting people like she used to so the Lee's people in narrative crank up her aggression. Elise (Shannon Woodward, with quite hilarious dialogue) in turn, cranks it back down. These mood shifts are coupled by memories of a "past life" of Maeve's, where she was a victim of an Indian raid, only for her (and her daughter) to fall victim to the Man in Black (Ed Harris). Elise says despite the hosts knowing the concept of dreaming, they aren't supposed to actually be doing it.

All this turbulence leads the park to schedule Maeve to be decommissioned, putting a ticking clock on her. When she is put in sleep mode for maintenance, her dreams enable her to wake up in the middle of the "surgery." The two technicians freak out, as does Maeve. The show wisely puts us in her shoes, with a tight camera focus on her face as she wakes up, Neo in The Matrix-style, from her existential slumber. She grabs a scalpel and wanders naked through the darkened facility.

Eventually, she stumbles on the Westworld "back of house" and sees what it means to close a facility that murders its hosts on the daily. Men in protective suits powerwash the corpses of Maeve's fellow androids, a display the hits right in the uncanny valley. The people on the show truly believe these hosts aren't people but we, the audience and the writers themselves, know better. It's this that causes Maeve to collapse in horror as the technicians finally catch up to her and put her to sleep again. We got to spend a little more time on the inner workings of the park this week, with Bernard (Jeffrey Wright) continuing to chase down answers to questions he doesn't want answers to and Sizemore (Simon Quarterman) crafting a brand-new storyline to satisfy Management.

Why Sizemore is written as such an indiscriminate asshole is bewildering, especially after his straight-up abuse of employees is followed by barely a mention from his supervisor Theresa Cullen (Sidse Babett Knudsen). Sizemore is typically immodest about everything so it's clear, when he gives a big Steve Jobs-esque presentation on his "amazing" narrative, Ford (Anthony Hopkins) will shut him down. And shut him down he does.

His "reason you suck" monologue to Sizemore was well-deserved and dovetailed nicely with the themes I liked this episode, of guests using the park not to be who they are, but who they could be. The Man in Black fancies himself a supervillain but I'm almost certain he's a paper-pusher in the real world a la Locke on Lost. William on the other hand is chasing the white rabbit of heroism. We all want to transcend our roles and be who we aspire to, for good or ill ("these violent delights have violent ends" we are yet again reminded. It's a good quote but if this becomes an episodic thing, we might have issues).

Back to Cullen, turns out her and Lowe are sleeping together. I don't really know what that added to the episode or the series, since neither actor has chemistry or characters we truly know and care about yet.

While not blessing us with his Sizemore smackdowns and philosophical talk about bringing life out of chaos, Ford was going on long walks through his creation, because one of the perks of creating your own reality is a private elevator and control of literally every being inside it. There were so many great moments, whether in Hopkins' interactions with the boy host to using the magic of the park to manipulate a rattlesnake.

I began to wonder, as Ford walked with the boy to an unfinished area of the park adorned by a blackened church tower, was this boy Ford? He's even dressed like him, down the vest and white button up shirt. Did he recreate his childhood self? It would the height of weird sci-fi and I would LOVE it if it were true.

Whatever the case of the random boy, seeing Ford alone for the first time gives some insight into what we suspected last week: Ford, for all his talk of reaching the end of evolution, is planning something big, that these host glitches may be actually designed intentionally by him. He has a storyline in store for Management, he says in one of those meta moments when it feels like the writer communicating directly to the audience. After all, when you've done all you can do, what is left but to cross the next line?

As Ford says to Lowe, seemingly without context, is that you can't create life without the devil. Speaking of which . . . Another person talking about chaos this week is the devil to Ford's God and that's the Man in Black. A bit of behind-the-scenes tragedy: the actor who played Kissy in the premiere was going to stick around, until he died just after the pilot was shot. It does make me wonder if the scalping scene was always there or just a way to write out the character in a way that made sense to the story.

In any case, the Man in Black has a new target this episode: Lawrence, played by character actor Clifton Collins, Jr. a host acting as outlaw to be hanged. His execution is interrupted by Mister Gunslinger, who drags him back to his hometown. See, he's killed, raped and tortured to his delight for 30 years. At a certain point, you need more or as he calls it, the "deeper level."

For the Man in Black, the reason he prefers Westworld to the real one is because the latter is chaos. Meanwhile, everything in the park is purposeful, a big puzzle waiting to be solved. Like most RPG gamers, he is obsessed with 100 percent completion. While most other guests are preoccupied with the side-quests (leave the Hinterlands!), he's interested in the main story. According to poor Kissy's scalp, that main story is "the maze."

See the Man in Black is looking for the end of the game and he doesn't plan on coming back from his quest. He's not just a man in a virtual reality; he's a man in a virtual reality with nothing to lose. No outside life he's willing to go back to, no compunction from slaughtering Lawrence's whole town and even his wife. The show doesn't let him get away with his hubris entirely here, as Lawrence's daughter tells him he's not meant to go there (you, like me, might be wondering how the Man in Black gets away with such unscripted carnage in the park. The show has got us covered there: after seeing aftermath of the town massacre, the head of security Stubbs explains this guest can do "whatever he wants").

Thanks for reading! Promos and trailers for episode 3 will be on the site as soon as HBO publishes them. In the meantime, let's talk about the episode in the comments!