Page 1 - It seems as though Zack Snyder is keeping himself busy as of late. After a test screening last night in California for Wonder Woman, Zack Snyder,...

It seems as though Zack Snyder is keeping himself busy as of late. After a test screening last night in California for Wonder Woman, Zack Snyder, director of the upcoming Justice League film, took a picture with a The LEGO Batman Movie standee.

He posted the picture along with a hilarious caption on the mobile app Vero. You can check out the image below.

“Am I going to stand like a dork in the Lego Batman standee?, fuck yeah I am.” 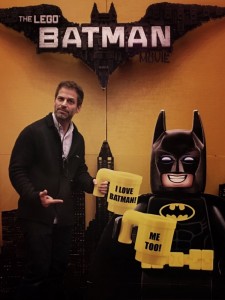 In other related DC news, Zack Snyder revealed today that a Justice Leauge trailer will be out relatively soon.

“Trailer is all part of marketing and there is a set schedule for release it’s coming soon don’t worry.”

Additionally, the actor who will play Ares in Wonder Woman was revealed today as well.

In Justice League, fueled by his restored faith in humanity and inspired by Superman’s selfless act, Bruce Wayne enlists the help of his newfound ally, Diana Prince, to face an even greater enemy. Together, Batman and Wonder Woman work quickly to find and recruit a team of metahumans to stand against this newly awakened threat. But despite the formation of this unprecedented league of heroes—Batman, Wonder Woman, Aquaman, Cyborg and The Flash—it may already be too late to save the planet from an assault of catastrophic proportions.