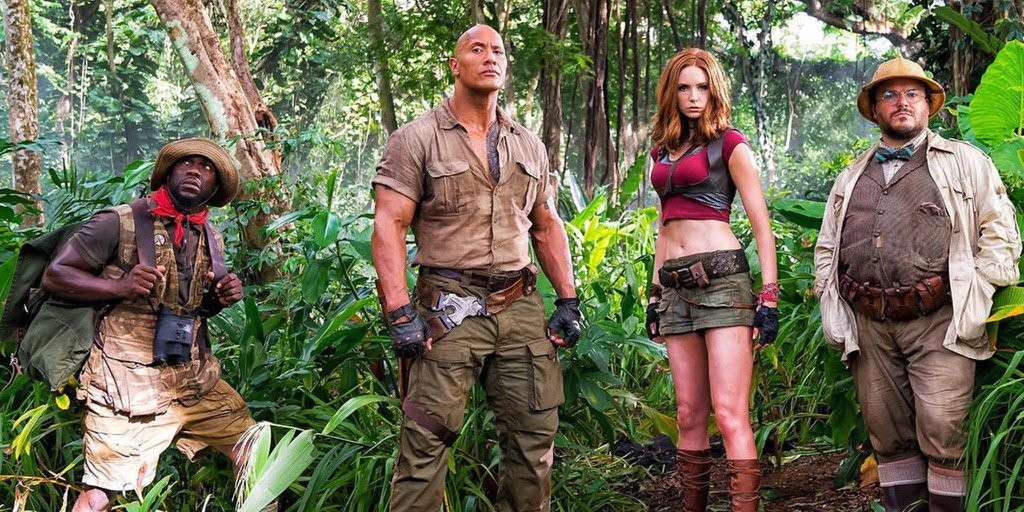 When Kevin Hart and Dwayne ‘The Rock’ Johnson posted the first official photo of the assembled cast for the Jumanji sequel/reboot/remake/whatever the hell it is, there were some people not very pleased by one character’s choice of clothing. Can you guess who? That’s right, Karen Gillan’s character was revealed to be wearing…well not that much. While this choice of outfit for Gillan’s character is not necessarily surprising (most ‘strong’ female characters in action movies have worn shorts and a croc top since before Tomb Raider), it is still arguably disappointing.

And if you are one of those disappointed with Gillan’s outfit (which I’m sure is everyone’s biggest problem with this film), then you can relax, because there is a reason behind it, apparently. While the Rock’s original Instagram post did mention that Gillan’s outfit had a backstory behind it, this seemed to either go over the heads of people or was just plain ignored. Well, Gillan has taken to Twitter to clarify that she’s not just wearing that outfit to help sell tickets or anything so absurd. Check out the tweet below.

Jumanji! Yes I'm wearing child sized clothes and YES there is a reason! The pay off is worth it, I promise! #Jumanji pic.twitter.com/qBshnhwV6K

Just what could this reason be? Well, the current working theory is that Gillan and co-star Kevin Hart are children who have been sucked into the world of Jumanji and transformed into adults in the process. I’m not quite sure how comfortable I feel about this theory, with it meaning Gillan’s character who is clearly geared to be the stereotypical strong, sexy, independent female lead in the film, is actually a child. Hmm.

So, there you have it. Don’t worry guys, there’s a reason Gillan is underdressed compared to the rest of her male cast in Jumanji that doesn’t involve sex appeal. What do you think of Gillan’s look in the film? What about the look of her co-stars? Do you even want a Jumanji sequel/reboot? Discuss in the comments section below.