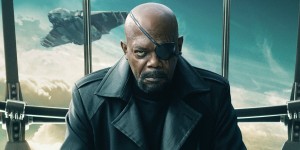 The MCU really hasn’t seen a major appearance from Nick Fury since Captain America: The Winter Soldier but according to Samuel L. Jackson, who plays the elite super-spy for Marvel studios, fans can expect to see him show up soon in the upcoming future Avengers sequels. During an interview with Steve Weintraub, Jackson—who is currently doing press for Miss Peregrine’s Home for Peculiar Children, was asked if Nick Fury would have a big part or a small part in the Avengers movies to which Jackson replied:

When questioned further on the subject of when Nick Fury could be expected to arrive in Atlanta to start shooting his parts for the movie, Jackson admitted to Weintraub that he didn’t know when he would be filming. After his small role in Avengers: Age of Ultron and a brief cameo on the Agents of S.H.I.E.L.D. fans had been wondering for a while now what would happen with the character considering that everyone in the MCU outside of a few people thinks he is dead at this point. So it’s going to be very interesting to see what the Russo brothers plan to do with the character in the upcoming Avengers: Infinity War film.

“You know, I don’t know anything about it because I showed up, I did two days with Vin. Maybe a day-and-a-half. I sort of intro the movie and I extro the movie. I don’t know what happens in the middle of it.”