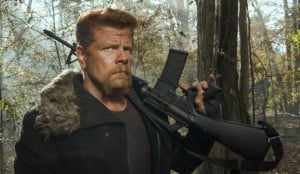 The last time we saw actor Michael Cudlitz as Abraham he was on his knees at the mercy of Negan and his merry band of ‘Saviors’ with nothing but a bleak and horrible future ahead of him. This of course came after a sixth season of The Walking Dead that had its fair share of surprises for the character that included leaving his girlfriend and attempting to build a new relationship for the future which seemed bright at the time.

But as we all know from previous seasons, The Walking Dead is not a show that deals with fairy tale endings or magical destinies that involve happy futures for its characters.  In fact its quite the opposite as the harsh reality of an apocalyptic dystopian existence surrounded by zombies suffocates and destroys each character one by one in sometimes gruesome fashion. It’s a reality that Cudlitz himself was not shy in reiterating recently when he was quoted saying:

Unable to go into much detail about where the seventh season of the series would take his character, Cudlitz did take time to elaborate his perspective on the shows finale for the sixth season by saying:

“The Season Finale is great because, from the minute it starts, you know it’s not going to end well for so many reasons. There is the claustrophobic element of the RV and the ticking time bomb of Maggie getting sicker and sicker, forcing us deeper and deeper into this trap. It starts closing in on us roadblock after roadblock. Everything about this is implying the size of the force that we are dealing with is way larger than what we have and what we have ever encountered. We are not dealing with people who don’t know what they are doing.”

The Walking Dead returns on October 23 at 9 PM ET on AMC.