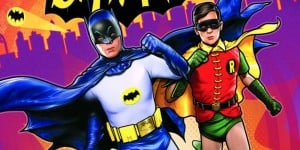 Months ago when news hit the Internet that the 1960’s animated Batman series was being re-energized in the form of a new film, fans were elated.  Since the iconic series is most notable for showcasing one of Adam West’s most recognizable portrayals as Gotham’s favorite vigilante, the reaction to the Batman: Return of the Caped Crusaders film was very understandable. Especially since several of the other original actors from the series are reprising their roles from the animated series as well. Not only can fans expect Adam West to return to as the voice of Batman, Burt Ward and Julie Newmar bring  Robin and Catwoman back to life respectively to make it one big reunion.

Today, DC All Access released an exclusive clip of the movie based on four of Batman’s greatest villains who unite together in an effort to take over Gotham and take down their arch nemesis once and for good. The clip features Joker and his super-villain cohorts The Penguin, The Riddler, and Catwoman as they reveal themselves to a group of unsuspecting Gothamites in a club of some kind as part of their wicked scheme. Check out the clip below:

Check out the clip below:

If you want to know more about the full-length feature, check out the official synopsis:

“It’s back to the 1960s as Batman and Robin spring into action when Gotham City is threatened by a quartet of Batman’s most fiendish foes – Penguin, The Joker, Riddler and Catwoman. This time, the four Super-Villains have combined their wicked talents to hatch a plot so nefarious that the Dynamic Duo will need to go to outer space (and back) to foil their arch enemies and restore order in Gotham City. It’s a truly fantastic adventure that will pit good against evil, good against good, evil against evil … and feature two words that exponentially raise the stakes for both sides: Replicator Ray. Holy Multiplication Tables!”

Batman: Return the Caped Crusaders will be available on October 11th, 2016 on digital HD with the Blu-ray due out November 1st, 2016.