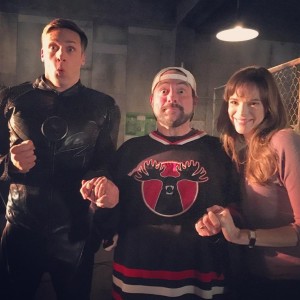 Oh, Kevin Smith. Many of you are either rolling your eyes already, or perhaps you are lighting a victory joint because we actually posted this article. That’s right: Kevin Smith is one of the most divisive figures in fan culture. From a highly publicized visit to the top-secret Star Wars: The Force Awakens set, to his hosting of primetime DC Comics events on the CW, he always seems to be appointed as ambassador of the average fanboy. While I’m perfectly fine with it (you’ll see why soon), this doesn’t sit well with many people. Why? Well, for one, the films that made him famous have nothing to do with superheroes aside from being occasional topics of conversation: Clerks, Chasing Amy, Mallrats… they’re all romantic comedies at heart. Yet, his passion for these nerd properties led him to write on several occasions for both DC (Green Arrow, Batman: Cacaphony) and Marvel (Daredevil), get offered to write a Green Lantern film, and host a reality show Comic Book Men on AMC. So why the hell am I excited for a guy who is mostly known as a rom-com writer-director who simply likes superheroes to direct ‘The Flash’, one of the most successful superhero shows of all time?