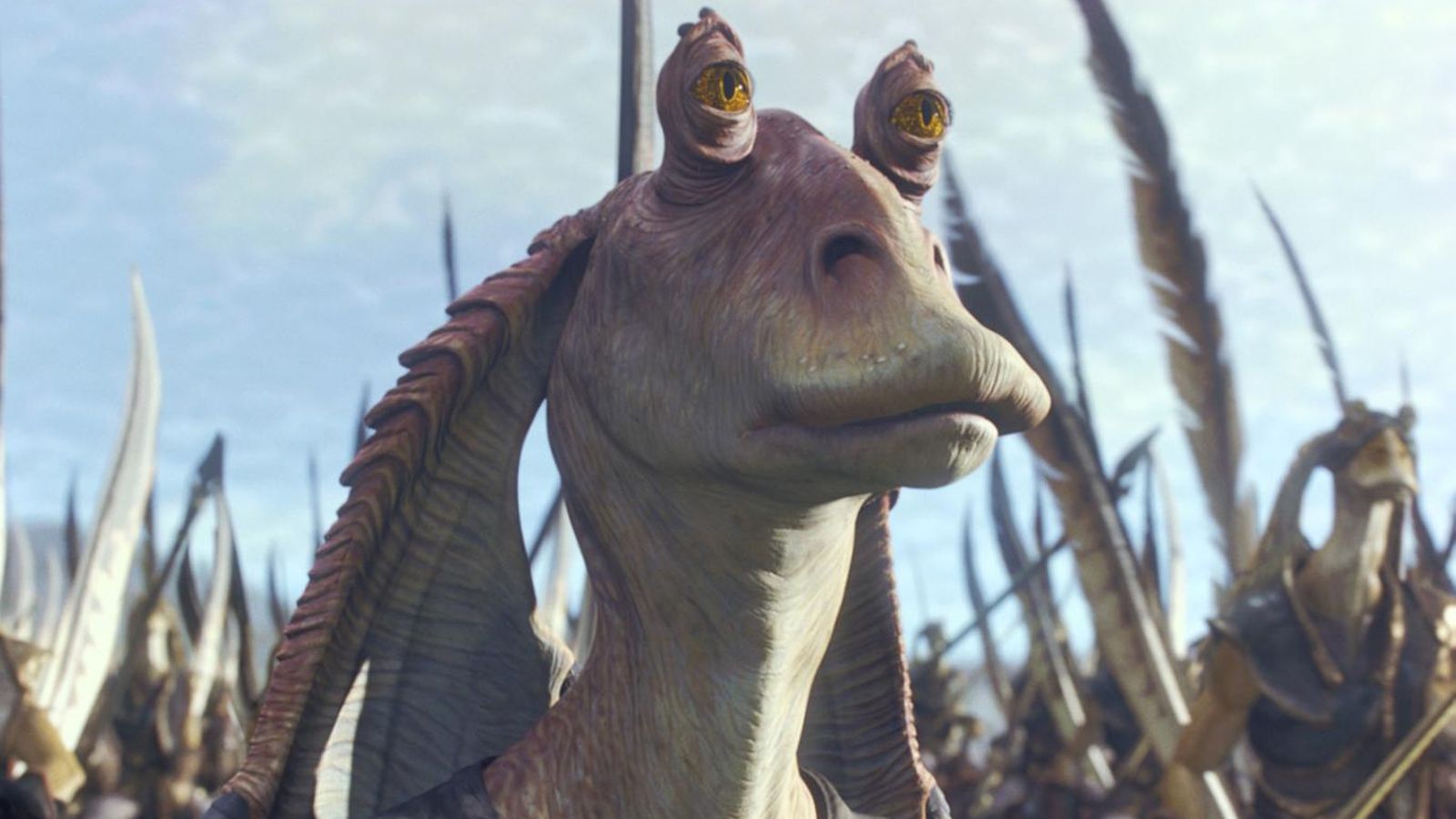 A new excerpt released from Aftermath: Empires End, Chuck Wendig’s conclusion to the Star Wars: Aftermath trilogy reveals the fate of the franchise’s most infamous character, Jar Jar Binks. The Aftermath series has always featured interludes that splinter from the main plot to deliver scenes set in other corners of the galaxy and the upcoming novel will include an interlude with the clumsy Gungan.

While the character was shunned by fans, George Lucas made sure to let us know Jar Jar was still around by having him briefly appear in Star Wars Episode II: Attack of the Clones and Star Wars: Episode III: Revenge of the Sith but beyond the prequel trilogy we never saw what became of him. That is until now.

Warning: The following may be considered as a spoiler for Aftermath: Empire’s End. The excerpt released features Jar Jar performing on a city street of Naboo as a clown. Jar Jar has once again become an exile of the Gungan people. After helping unite the Gungans with the people of Naboo, the war hero and former politician is now suspected of helping the Empire during the fall of the Republic.

The interlude features a young boy named Mapo when he meets a Gungan street performer on the street of Naboo. You can read how Wendig sets up the scene below:

Since children started coming in by the shipload as refugees, the Gungan has served them, performing for the kids once or twice a day, He does tricks. He juggles. He falls over and shakes his head as his eyes roll around inside their fleshy stalks. He makes goofy sounds and does strange little dances. Sometimes it’s the same performance, repeated. Sometimes the Gungan does different things, things you’ve never seen, thing’s you’ll never see again. Just a few days ago, he splashed into the fountain’s center, ten pretended to have the streams shoot him way up in the air. He leapt straight up, then back down with a splash. And he leapt from compass point to compass point, back and forth, before finally conking his head on the edge and plopping down on his butt. Shaking his head. Tongue wagging. All the kids laughed. Then the Gungan laughed, too.

The clown, they called him “Bring the clown. We want to see the clown. We like it how he juggles glombo shells, or spits fish up in the air and catches them, or how he dances around and falls on his butt.”

The adults, though. They don’t say much about him. Or to him. And no other Gungans come to see him, either. Nobody even says his name.

After the young boy introduces himself and the Gungan responds “Meesa Jar Jar,” Jar Jar goes further to explain that “makin some uh-oh mistakens” has led him to where he is. It seems the galaxy holds him responsible for motioning the Senate to give emergency powers to Supreme Chancellor Palpatine — the final nail in the coffin for the Republic.

When Mapo asks why no one talks to him anymore, the clown responds:

“My no so sure.” The Gungan makes a hmm sound. “Mesa thinks it cause-o Jar Jar makin some uh-oh mistakens. Big mistakens. Der Gunga bosses banished me longo ago. Mesa no been to hom in for-ebbers. And desa hisen Naboo tink I help the uh-oh Empire.”

The interlude concludes leaving Jar Jar in his shame as a clown on the streets of Naboo. Given the interludes in past novels of the Aftermath series, this is probably all we will see of Jar Jar for now but this certainly leaves things open for him to return again.