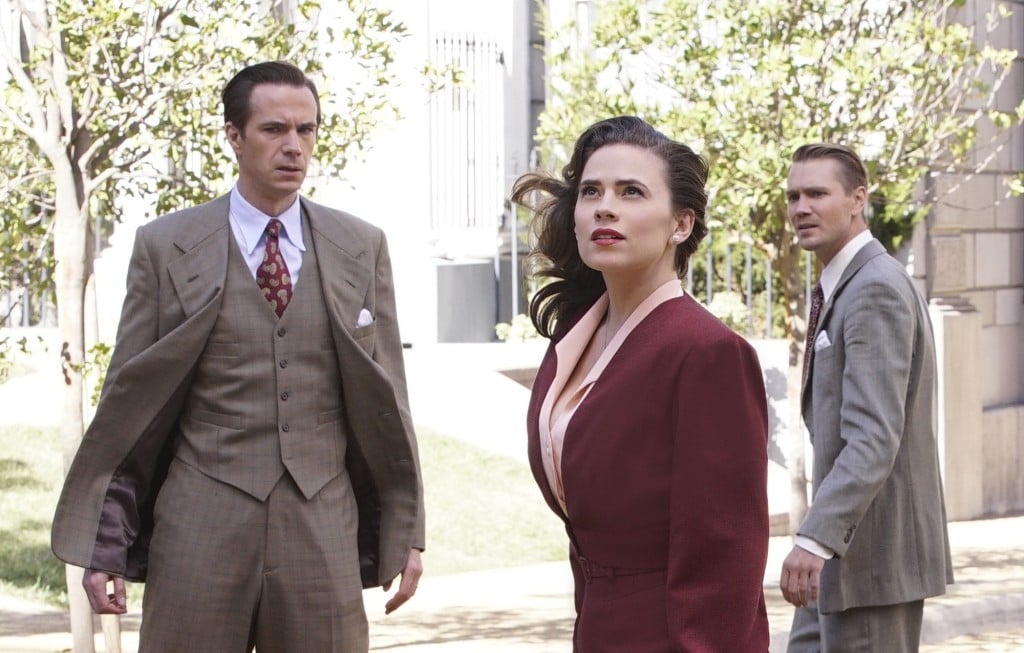 Well, here we are. The curtain has fallen on Agent Carter Season Two, and perhaps the series altogether. The arc of my relationship with this season has certainly been interesting, having initially been vaguely disappointed by what I viewed as kind of muddled themes, only to be gobsmacked by the realization that maybe the show was operating on a level that was much more clever than I gave it credit for. But now, at the end, we can finally look back at this season as a whole and judge with confidence how the bigger picture came together. Sadly, it seems like the themes may have been a little muddled after all.

We pick up right where we left off last week – or, to be more precise, 60 seconds before where we left off last week – with Carter, Sousa, Thompson, and Samberly debating on whether or not to blow the crap out of the dump (er–, waste management facility) where Frost and Wilkes are holed up. The debate is settled for them when Wilkes loses control of the massive amounts of Zero Matter contained within his system, and unleashes it in a violent explosion. The upside: Wilkes is now free of the Zero Matter and fully tangible once again! The downside: the first law of thermodynamics means all that Zero Matter has to go somewhere, and where should it choose to go but to Mrs. Whitney Frost? As Frost is reacting to her newfound power, Howard Stark and Jarvis arrive just in time to spirit Wilkes and the S.S.R. agents away to safety. Back at the Stark mansion, they discuss their next course of action – with the black man now stripped of his power, all that’s left it to put the woman back in her place to restore the status quo.

This element of the episode is fascinating and it plays right into my reading of the season as a tragedy. The Arena Club – this tangible representation of the patriarchy – may have been eliminated by Whitney Frost, but the patriarchy is not confined to a single group. Much like HYDRA, when you cut off one head more will grow to seamlessly take its place, and so is the case with Agent Carter and the S.S.R. After all of Peggy’s work to establish herself as a fierce, independent woman, she too is defeated by the patriarchy. She doesn’t even get to go down fighting like Frost does, instead she’s absorbed into it like so much Zero Matter, and finds herself working alongside seven men to put an end to a woman with power threatening the security of this male-led society. This idea is further highlighted by the fact that the only two women of consequence in this episode are Whitney Frost and Peggy herself. Over two seasons this show has built a solid stable of strong supporting ladies, but they’re all absent here. Instead it’s just two women in an uncharacteristically male-heavy episode, one of whom stands opposed to men and one who is working to further their goals. It’s a terrific setup for a conflict; our progressive hero finds herself compromised as she is co-opted to help maintain the status quo, and our villain is actually the one on the right side of history, even as she’s using unjustifiable means to reach those ends. Both of their intentions can be justified, even as their actions must be condemned.

The problem, though, is that when it counts, the episode drops the ball. Joseph Manfredi – who up until now had been the most supportive of Frost’s newfound power, – now suddenly finds himself emasculated, and turns to the boys (and girl) at the S.S.R. to help him “take care of the problem.” They learn that Frost has been working on plans for a device that would allow her to reopen the rift to the Darkforce dimension without the need for an atomic explosion. After stealing Frost’s plans, Stark, Wilkes, and Samberly are able to complete the device and use it to open a portal on the Universal– I mean, Stark Pictures backlot to draw Frost out of hiding. The plan is to get Frost close to the portal, blast her with the gamma gun, and allow the Zero Matter to drain back into the Darkforce dimension, and that’s pretty much exactly what happens. The plan goes off mostly without a hitch. There’s some stakes raising when they have some trouble closing the portal, but in the end, Frost is defeated, the Zero Matter is banished from our dimension, and the Agents of the S.S.R. are no worse for wear.

While this is all fun and well executed, the thing that’s disappointing is that it’s just ordinary happy ending stuff. The hero wins, the villain is defeated, and no one feels particularly morally compromised, even though being morally compromised seemed to be the entire purpose of this season. Maybe I missed something (after all, I watched this sucker at 4 am over a cup of coffee), but I was really looking for even a hint of tragic irony to pull the rug out from under this otherwise bog standard happy ending, but there was nothing there. Once again I’m faced with an internal dilemma. When I reevaluated the show last week was I misreading it? Were my initial hang-ups correct, and I was merely projecting greater meaning onto something that didn’t actually have it? I don’t believe that to be the case, because not only were the themes I picked up on very deliberately stated last week, they also carried over into the first half of this episode. They just couldn’t quite stick the landing.

There are a hundred reasons why this might have happened – the most likely to me is that since the renewal of the show for a third season is so up in the air, Marvel didn’t want to end this whole thing on a bummer note – but whatever the reason, it’s a shame. Marvel did something really clever and really ambitious with this season of the show by allowing it to toy with audiences’ expectations to deliver on themes much more subtle and complex than they did in Season One, but in the final moments they blinked and they failed to bring it all the way home.

Still, even with its shaky landing, this was still a pretty darn enjoyable season of television. There were missteps, certainly, but on the whole, it was a whole lot of fun. I do sincerely hope that this isn’t the end for Agent Carter, not only because of the threads they left loose for a future season (Arena Club pin is secretly a key! Jack Thompson is murdered by a mysterious assailant!), but because I have so much fun spending time in this world and with these characters. For all of Marvel Studios’ successes (and there are many) one of the most surprising has been Peggy Carter. It’s rare enough for “love interest” characters in big blockbuster movies to be worthwhile even in the role they’re placed in, but to have one be so good, so compelling that she can successfully spin-off and lead a short film and two seasons of a television show is exceptional. Hayley Atwell is powerhouse, and the work she’s put into creating and continuing to develop this character on screen is tremendous. If this is the last season we get of her solo adventures, it’ll be sad, but at least we had a damn good run.