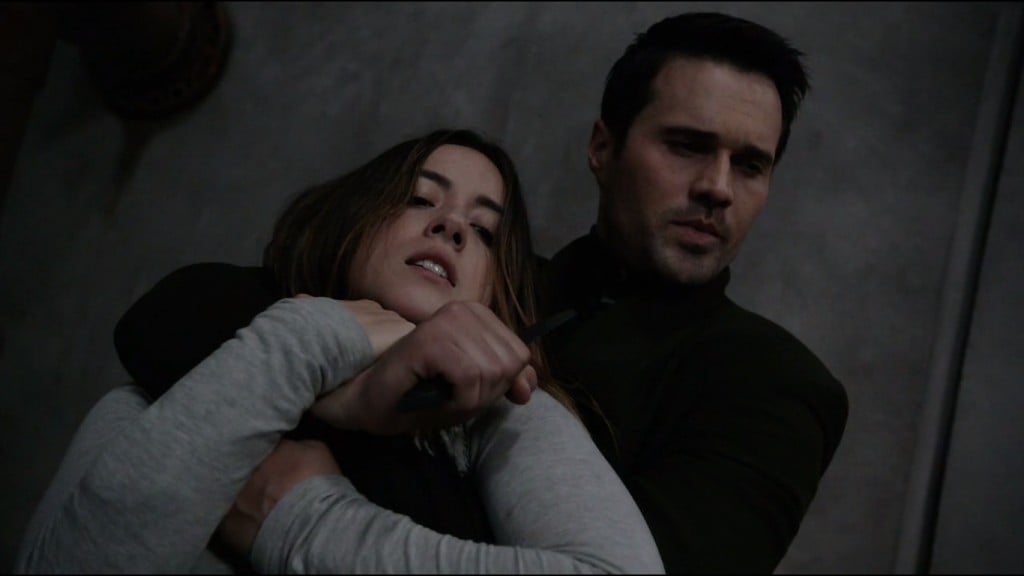 It’s over! We have, at long last, reached the end of the third season of Marvel’s Agents of S.H.I.E.L.D. and boy was it, er– something. Look, I’ve made no effort to hide my disdain for this show, and the fact that I think this half-season is the among worst the series has been – a low point for the series surpassed only by the truly dreadful first season – so I’m not going to waste time going over all of that again in this preface. Instead, let’s just jump in and get to the meat of this two-hour beast of a finale.

Things start out with a bang as the agents of S.H.I.E.L.D. are hot on the heels of Hive and his merry band of monsters who, as you’ll recall from last week, are attempting to steal a missile that can be used to disburse Hive’s terrible Terrigen cocktail into the upper atmosphere. Hive and his goons have managed to infiltrate the silo where the missile is being held and are scanning the skies for incoming Quinjets, but S.H.I.E.L.D.’s attack doesn’t come from the sky. Instead, May manages to slip a Quinjet under Hive’s radar by slipping it underwater. As May, along with Mack, Elena, and Lincoln are making their way into the missile base, Coulson, Fitz, and General Talbot attempt to gain access to the kill codes to shut down the missile launch.

This whole operation, which take up about a quarter of the finale’s two-hour run time, is some of the most fun I’ve had with this show, maybe ever. The tone of it is something along the lines of ‘Marvel’s Mission: Impossible’ (it even has a version of the obligatory Mission: Impossible face-swapping), and it’s much more compelling than the show’s normal status quo as ‘Marvel’s NCIS.’ It’s fast, it’s fun, it’s light on its feet, and if the show was like this every week, I’d probably be way, way more into it. It’s proof positive that the way to make this show work is not by making it ‘darker’ and ‘edgier’ like ABC’s claiming the next season will be, but instead to actually deliver on the original promise of the show: a weekly spy series that has all the fun and energy of the big Marvel movies.

The problem, though, is like every other aspect of Agents of S.H.I.E.L.D., the work they do establishing a compelling tone right at the beginning of the episode is quickly thrown out as they change gears and go off in a completely different direction. For example, after the team enters the kill codes to deactivate the missile, Hive is alerted to their presence and comes after them, but the agents of S.H.I.E.L.D. have set a trap. When he gets too close, they subject him to jury rigged version of the memory machine used on Coulson way back in Season One, forcing all of the memories of the people he has consumed to come flooding to the surface, downing out his own will and power of thought. That’s a clever idea, and a potentially smart way to explore concepts of identity or maybe even introduce a means by which Hive is defeated by the very people he already killed, but instead they waste it. It’s just a plot contrivance that weakens Hive long enough to shove him in one of the gel containment pods so that we can play out another version of the tired villain-is-captured-by-the-heroes-but-ends-up-exactly-where-he-wants-to-be trope. Yawn. A Terrigen bomb goes off at S.H.I.E.L.D. HQ, the Inhuman zombies free Hive from his prison, and the whole memory thing is never brought up again. Instead, Hive attempts to steal the Zephyr One, and Daisy, who appears to be going to confront Hive, pleads with the monster, begging him to take her back into his thrall.

There’s an attempt at an addiction metaphor here, but as is always the case with this silly show (sing along if you know the words!) the metaphor falls flat because the show hasn’t bothered to put in the work to properly set it up. I mean, sure, a couple episodes ago they brought up the idea that Hive’s influence alters your brain chemistry like a drug, and by Agents of S.H.I.E.L.D. standards that’s an almost unprecedented amount of foreshadowing, but the problem is, on a character level, there’s nothing about this that plays. Addiction is never something that Daisy has struggled with, so choosing that character to ‘fall off the wagon’ doesn’t have any weight to it. For these kinds of metaphors to work in any sort of meaningful way, they have to be baked in with the characters’ arcs and personalities. Tony Stark standing-in for the idea of sacrificing individual liberty for a sense of collective security works because that character’s whole journey has been about having to deal with the fallout of his own actions. It makes sense for him to want to surrender his power because he no longer trusts himself with it. There’s never been that kind of consistency with Daisy (or any of the Agents of S.H.I.E.L.D. characters for that matter), so when she’s cast in the role of the metaphorical relapsing addict, it feels like playing dress-up.

But either way, Hive can’t take Daisy back even if he wanted to because whatever Lash did to purge the parasites from her system has made her permanently immune to Hive’s influence. Instead, Hive takes her prisoner, and makes off with the Zephyr One, rocketing up into the atmosphere to activate his doomsday device. Meanwhile, the other agents of S.H.I.E.L.D. (along with Dr. Holden Radcliffe, who’s playing for the good guys now) fight their way through the hoards of zombies now infesting S.H.I.E.L.D. HQ until they make their way to Coulson’s office where they summon a Quinjet and blast off in pursuit of the baddies. Once they reach Zephyr One, Coulson confronts Hive while the other agents go after Daisy. As for the bomb, the plan is to load it onto the Quinjet where it can be remotely piloted into the vacuum of space and explode without risking exposure to anyone on Earth. Unfortunately, Hive is one step ahead of them and arrives on the Quinjet right as Daisy is securing the warhead.

Daisy knows from her vision that someone will die on this Quinjet, and since she’s feeling vaguely suicidal, she decides it might as well be her, and attempts to lock herself and Hive in the Quinjet along with the bomb. Lincoln, however, has other plans. He boards the Quinjet, shorts out its manual controls and tosses Daisy overboard before the ship blasts off in its ascent towards outer space. As Lincoln and Hive enter orbit, trapped in a tin can with a literal time bomb, they share a moment of quiet reflection. In the past, I’ve accused this show of sometimes feeling like a bad cover band version of Joss Whedon, and while that’s a decidedly nasty criticism, it’s the best way I can describe this moment. This exchange between Lincoln and Hive is deeply, deeply reminiscent of the final exchange between the Vision and Ultron in Avengers: Age of Ultron, only with none of the meaning or pathos that conversation contained. Here, at the end, they try to give Hive some dimension, some sympathetic poignancy to his evil plan, but as always (second verse, same as the first!) it falls flat because the show hasn’t bothered to put in the work to properly set it up. You can’t have your villain be an unfeeling avatar of evil right up to the last episode of the season then suddenly expect us to be sympathetic to his plight in its final moments.

That is why I think I’m done with this show, because despite any of the show’s other successes or failings, Agents of S.H.I.E.L.D.’s only constant is a complete misunderstanding of how long form storytelling works. None of these characters work, because they aren’t allowed to have arcs, instead just changing from episode to episode to fit the needs of each individual plot. On a larger scale the stories themselves fail to include any kind of meaningful set ups and payoffs that might make it worth watching all 22 hours of the season. It’s a sloppy, incoherent, improvisational mess, and even fun moments like the first half-hour of this finale can’t overcome that underlying brokenness. And now that we’re three full seasons into this show, it’s abundantly clear that this is never going to change. Agents of S.H.I.E.L.D. is what it is, and what it is kinda stinks.

Click through the next few pages for some additional thoughts on the finale as well as a look forward at what’s in store for Season Four.