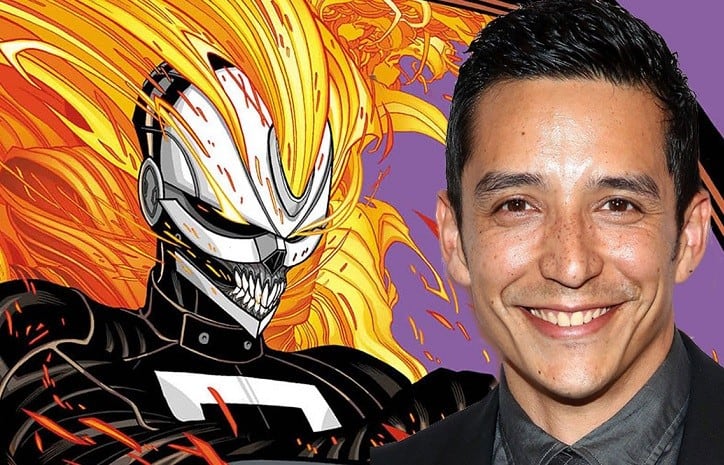 Many fans have been hoping for Ghost Rider to make his appearance in the MCU, and yet none were expecting the Ghost Rider we’re receiving. So speaking with THR, Jed Whedon and Maurissa Tancharoen explained their decision to go with Robbie Reyes instead of Johnny Blaze.

“Truthfully, Nicolas Cage turned us down, we moved on as fast as we could,” Whedon joked and then confessed it was Reyes’ backstory that was so compelling.

“At the end of the day, SHIELD is really a show about family,” Loeb said. “I know that it looks like a show about a bunch of spies that are running around on a big, giant plane that are saving the world every week, but it really is about a group of people who come together because they have no one else in their lives. When you watch the show from that point of view, you really understand that Coulson (Clark Gregg) is a father figure, and these people around him are people he needs to look after and make sure they’re okay.”

“Robbie’s story, in its inception, is the story of an older brother who’s looking after his younger brother, and then how the world of the Ghost Rider changes that dynamic,” Loeb says. “That’s true of any Marvel hero. We begin in a place where it’s something we can all relate to, and then something extraordinary happens to them, not that they’ve ever asked for it. What we’ll find out along the way is Robbie’s journey now that he has the burden of being the Ghost Rider, what that does and more importantly how that affects our cast at SHIELD.”

Granted even if Johnny Blaze came on S.H.I.E.L.D., many were hoping for Ghost Rider to debut on Netflix. Yet his appearance on S.H.I.E.L.D. may serve as either a backdoor pilot for a solo-series or a different Ghost Rider could get a Netflix show of their own.

“People are familiar with Johnny Blaze. Robbie Reyes is a new iteration of the character,” Tancharoen said. “There’s not a lot of material on the character so it gives us a lot of room to have our take on it. And also, just the fact that he is a young kid who grew up on the streets of East L.A., we liked that backstory. We like seeing a character like that in the mix of our team.”

Robbie Reyes also allows for more diversity in the MCU, and will be the first Hispanic superhero to grace the cinematic universe.