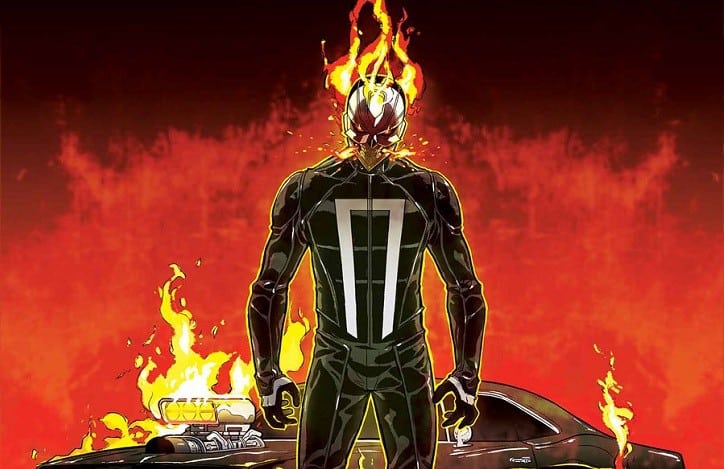 The first look at Ghost Rider in Agents of S.H.I.E.L.D. has been revealed, sadly not in flaming skull form however. Alongside this image, the first episode of Agents of S.H.I.E.L.D.‘s fourth season has had its title revealed. While no synopsis for the episode was released alongside it, the title seems to hint at an early appearance of the highly anticipated character.

The image below shows Gabriel Luna suited up in a costume very reminiscent of his comic book counterpart’s costume.

The premiere is titled “The Ghost,” and as ‘Ghost’ is the first half of Ghost Rider’s name, it’s not too far of a jump. Granted the title could be alluding to several things within the episode: a possible return from the dead? Someone having gone undercover? But is likely hinting Ghost Rider’s first appearance.

Robbie Reyes (Gabriel Luna) will roar into the lives of Agent Coulson and the team as a junkyard mechanic who can turn on a dime into the terrifying Ghost Rider. Will Robbie be a friend or foe to S.H.I.E.L.D. – as well as the world, itself? Meanwhile, Fitz discovers that socially awkward genius and friend Dr. Radcliffe (John Hannah) has started putting the finishing touches on a new, secret invention.