It can be difficult to be enthused about remakes or live-action adaptations of animated classics, but Disney truly struck gold with Aladdin. Co-written by John August and Guy Ritchie, who also handled directing duties, the film is an emotionally tight, adventure-filled romp that pays justice to the original with some nice, modern flair thrown in for good measure.

A story about a generous “street rat” and a loving princess who both want to be more than the world tells them they can, Aladdin is a light and silly movie that explores some deep, personal themes. Mena Massoud turns in a wonderful performance as Aladdin and he feels truly comfortable in Agrabah as he swaggers and dances his way from one adventure to the next. Abu may be computer generated, but Massoud has a great way of making it seem like there really is a monkey running the city serving as an extension to his fingers.

One of the distinguishing factors here is the boosted role for Princess Jasmine (Naomi Scott) as the character desparately tries to assert her knowledge. Much of the movie is precipitated on the fact that other characters, especially her father the Sultan (Navid Negahban) and Jafar (Marwan Kenzari), hold her back from reaching her potential, and she constantly tries to prove to herself and others that she would be a good, selfless leader. Princess Jasmine may need to get married in this movie, but it’s for practical, political reasons. She’s in no means twiddling her thumbs waiting for a man to set her life right. 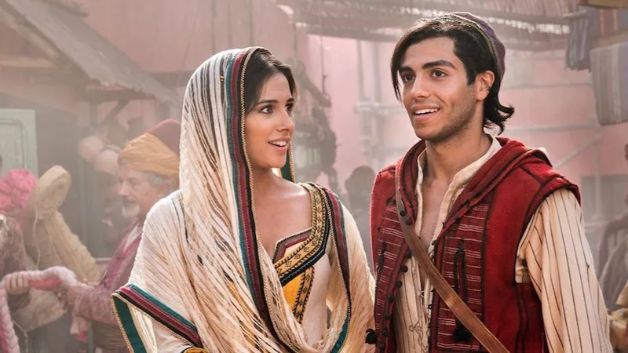 At the center of everything is some amazing chemistry between Massoud and Scott. Right from their first scene together it’s clear there is a spark between the characters and it’s enjoyable to see them banter and recognize their true feelings throughout the film. Whether they’re dancing together or running away from guards in the city, it seems like the two characters are truly having fun whenever they’re off together and their feelings develop in a nice, slow way that makes their whole relationship feel believable and touching.

The film is called Aladdin, but Will Smith receives top-billing for his amazing performance as the Genie. It’s an insane task to step into Robin Williams’ shoes, but Smith manages to infuse his own flair into the role while keeping his performance true to the character. It’s been a while since Smith has been able to let his goofy side dominate a performance, and it’s clear that he’s having fun whenever he’s joking his way across the screen. The film also does a nice job fleshing out the Genie’s character and making him more human in his quieter moments. Whether he’s dancing in a dress or distracting /flirting with Princess Jasmine’s Handmaiden Dalia (Nasim Pedrad), Smith’s Genie is consistently the most entertaining thing onscreen.

Guy Ritchie may be known for stylized action movies like The Man from U.N.C.L.E. and Sherlock Holmes, but the man can direct a damn fine dance sequence. Numbers like “Prince Ali “or “Never Had a Friend” are just as bonkers and fun as the animated version and the live-action world never feels like a constriction to the madness. Ritchie also injects some of his signature flair, including some well-paced parkour sequences, in a way that gives the whole movie a nice, coherent sense of energy. As the characters whip and run through Agrabah, the camera is right there with them, getting their perspective and then quickly zooming back to see just how much hoopla they are causing in the city.

It can be difficult to translate an animated world to live-action, but Aladdin is beautifully and meticulously designed to look like a classic Arabian city. The markets are all buzzing with activity and full of flowing, colorful garments and spices, giving the movie a vibrant, lively feeling. The cave sequence where Aladdin first finds the lamp is probably one of the most iconic scenes in the original, and the adaptation pulls it off in a way that seems just as menacing and claustrophobic. It’s clear there are some green screens used throughout the film, but the set builders and prop masters all did a wonderful job creating a world that seems true to the time period..

Look, I know it may be hard, but please don’t judge Aladdin before you see it. Yes, the marketing makes Disney’s newest live-action adaptation look rather messy, but trust me when I say it’s a whimsical, fun movie that is just as sweet and enjoyable as the original.