Director Luc Besson is gearing up for his sci-fi epic, Valerian and the City of a Thousand Planets. The film, adapted from the Pierre Christin’s French graphic novel, will introduce several different species of aliens.

The first one is named Dan Makta, an alien ambassador. He can mostly be seen in the city of Alpha Station, serving on the council.

Makta’s head is very oval in shape, elongated at the top. He’s bald and, while his face looks very much like that of a human being, the sides of his head do not. Where a human’s ears are usually located, Dan Makta has two holes with tentacle-like extensions hanging down from each. 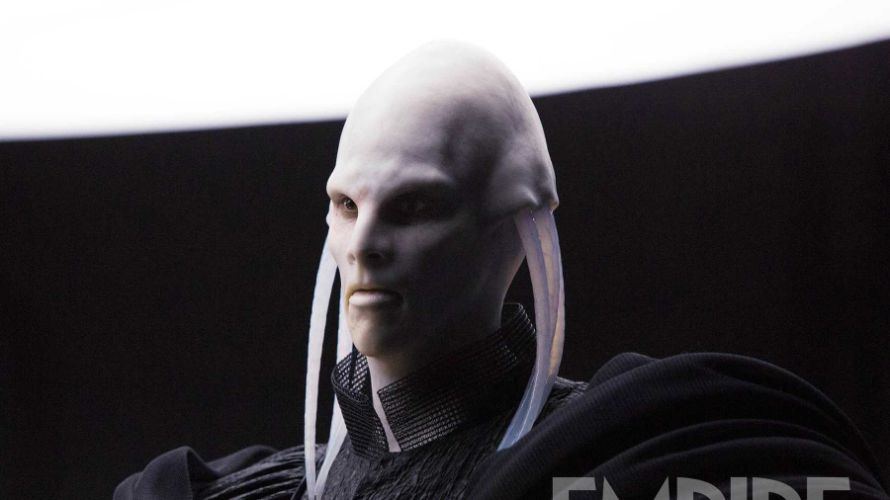 Besson discussed what to expect from the aliens in Valerian and how Alpha will be where  exchange of knowledge takes place.

“Most of the time when you see aliens in a film, they’re trying to destroy things. But Alpha is the city of science and culture: everybody is exchanging knowledge. It’s a very rich world.”

Here’s the official synopsis for the movie:

Valerian (Dane DeHaan) and Laureline (Cara Delevingne) are special operatives for the government of the human territories charged with maintaining order throughout the universe. Valerian has more in mind than a professional relationship with his partner- blatantly chasing after her with propositions of romance. But his extensive history with women, and her traditional values, drive Laureline to continuously rebuff him.

Valerian and the City of a Thousand Planets hits theaters July 21, 2017.