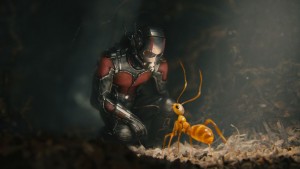 Fans have joked that it often feels like Disney has taken over the movie industry with various popular franchises now under their domain. Yet despite dominating the box office with projects from Marvel Studios, Lucasfilm and Pixar, the cinematic worlds belonging to these various Disney-owned studios have rarely crossed paths. Now, new concept art for Ant-Man reveals that a character from one of Pixar’s most financially successful franchises was once considered for an appearance in the Marvel Studios film.

It appears the character Sheriff, a 949 Mercury Eight police car, was originally considered for the toy that would play a large role in the film’s climax in the event that producers could not get the rights to use Thomas the Tank Engine.

You can view more of Andrew Kim’s concept art for Ant-Man here.

Ant-Man and the Wasp is scheduled to be released in theaters on July 6, 2018.