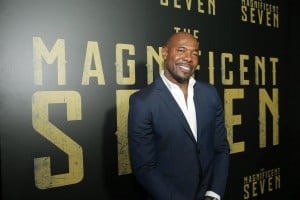 Because Western films take place in the past, many times in films directors and writers tend to use the authentic language of the past. Some of those words (like the N-Word) were used much more frequently than they are now due how people were treated. Some Westerns try to maintain that authenticity. Recent examples include The Revenant which describes Native Americans as “Tree Ni**rs” and of course Quentin Tarantino’s last two Westerns, Django Unchained and The Hateful Eight which were loaded with the N-Word. Tarantino defends his use in most of his films by saying that he’s being authentic to the story, but has come under fire for the excessive use of the word in his latter two Westerns.

The Magnificent Seven, directed by Antoine Fuqua and starring Denzel Washington and Chris Pratt is the latest Western to hit theaters. The film is a remake of the classic 1960 Western of the same name, which is itself a remake of The Seven Samurai from 1954 Japanese film. One thing that is different about this film, is that it doesn’t really address race at all which is a change from recent Westerns. Fuqua explains that choice. When addressing race….

“Because you muddy it up when you do that. The Magnificent Seven was about seven guys from different walks of life who all came together to do the right thing at the expense of some of their lives – the ultimate sacrifice to fight against bad guys. Seven Samurai was the same idea. I went back to Kurosawa’s Seven Samurai and said, “What was Kurosawa trying to say?” And the word “samurai” means “to serve.” And I said, “Well, that’s it.” That’s the story: It’s about “in service of others.” And ultimately color, what does it really mean? Besides a conversation about racism, what does that have to do with the Magnificent Seven riding into town and stopping this guy from taking advantage of these people? It muddies the water.

When asked about his lack of the use of the N-Word in the film, people quickly bring up Django Unchained or The Hateful Eight. Fuqua addresses films use of the slur as well.

“Yeah, for what? For me, what’s the point of it? To degrade a person? You can call somebody an asshole. Does it have to be a word to degrade their race? To identify someone that way, it’s such an ugly word. What’s the point of it? And it’s interesting, if you don’t do it – if you succeed with the characters and the story and tell a good, entertaining movie – in a weird way, people forget. You walk out, “Oh that’s right, he was black, or Asian.” As far as your experience with the story, as long as it has something specific to do with that thing, then what’s the real point? Because it’s an ugly word and none of us want to hear it. I certainly don’t want to hear it. Denzel doesn’t want to hear it. So why would we have to go to the set every day and make a movie and hear that ugly word when we are making a movie about guys who do the right thing? Where does that fit in?”

In the film, there is only one reference to race reported is when Chris Pratt’s character Farraday and Manuel Garcia-Rulfo’s character Vasquez get into a verbal altercation. Fuqua explains that confrontation is more about alpha males being machismo rather than racial hatred.

“Yeah, that was just Farraday and Vazquez having a contest about who’s the good-looking badass. That’s just macho shit. And they laughed about it … who’s the coolest of the two. You know, I’ve fought so hard my whole career just to make movies…”

So does he have a point? Can a film be authentic to the genre without using the offensive authentic language? Sound off in the comments.