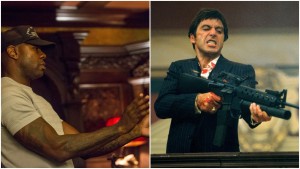 Director Antoine Fuqua has been on a roll recently. The director most famous for Training Day, and getting a memorable villain role out of the always-babyfaced Denzel Washington (enough to get Denzel the Best Actor Oscar), recently directed The Equalizer and Southpaw and soon will release a remake of The Magnificent Seven. With The Equalizer and The Magnificent Seven being remakes of existing properties (and The Magnificent Seven being a remake of Seven Samurai), Fuqua is slowly becoming the king of remakes. So what will his next film to reimagine (and probably star Denzel Washington) be?

Turns out Fuqua is in talks for a remake of Scarface. The film made famous through the Brian De Palma-directed remake of the Howard Hawks‘1932 Scarface film starring Al Pacino. This new version of Scarface will move the location from Miami to contemporary Los Angeles for a new rags-to-riches criminal storyline. There have been scripts written by both Paul Attanasio and David Ayer but the final screenplay was written by Jonathan Herman. The film will be distributed through Universal. No cast has been confirmed yet, but don’t be surprised if either Denzel or Ethan Hawke shows up somewhere in this film as Fuqua loves to work with them.