The DC Extended Universe (or Worlds of DC) is still continuing to chug along with superhero goodness, even after the unsuccessful Justice League film that was released last year. The film, that was highly anticipated for countless years by fans of the comic book team, only managed to earn just over $650 million dollars at the box office, against a hefty budget of $300 million dollars. In that film, however, one of the elements that many viewers of the film can agree on was great, was the character of Aquaman, portrayed by Jason Momoa.

As of now, several trailers and posters have been revealed, getting fans of the superhero excited for his solo film this December. Today, fans received their first-ever look at the special collectible IMAX tickets that fans can get their hands on if they purchase a ticket for Aquaman in IMAX this December. Plus, Regal Cinemas’ reward center is offering a free mini-poster with the purchase as well. 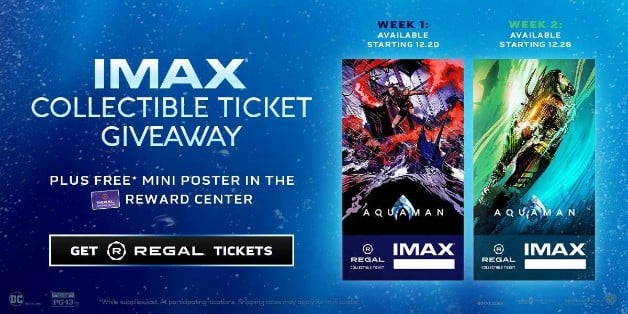 Aquaman will be released in theatres on December 21, 2018, by Warner Bros. Pictures.

Arthur Curry, the reluctant ruler of Atlantis and King of the Seven Seas, finds himself caught between a surface world constantly ravaging the sea and Atlanteans looking to lash out in revolt, but committed to protecting the entire globe.

The promo and official synopsis for the upcoming seventh episode of the DC Universe series Titans has been released along with a new batch of official stills.

The new series follows a grown-up Dick Grayson working as a Detective in Detroit, having left his nights with Batman long in the past due to having fundamental differences with the Caped Crusader's methods and approach to crimefighting before forming the superhero team known as the Titans. You can read the full synopsis below along with the promo. Click next to view the rest of the images from the next episode in the gallery.

The series continues this week with “Jason Todd” and you can read the official synopsis below!

Before Dick can reunite with The Titans, he reluctantly teams with Jason Todd (recurring guest star CURRAN WALTERS), the new Robin, to catch a serial killer targeting performers from Dick’s surrogate circus family from when he was a member of the Flying Graysons. But Jason’s perspective on Bruce Wayne forces Dick to reexamine the truth behind their falling out.

Titans is now available exclusively on DC Universe. Stay tuned for the latest news regarding the DC Universe series, and make sure to subscribe to our YouTube channel for more content!

I am a Canadian film critic, journalist, actor, and director. Movies are my passion.